On BBC’s Test match special show at Lord’s, recently-retired Indian legend Rahul Dravid had suggested that a window for the Indian Premier League might become a must in the future, so that the big names can feature in Tests as well as the lucrative T20 league.

On BBC’s Test match special show at Lord’s, recently-retired Indian legend Rahul Dravid had suggested that a window for the Indian Premier League might become a must in the future, so that the big names can feature in Tests as well as the lucrative T20 league. And while he has the right intention, that of preserving the sanctity of the five-day game, his suggestion borders on the impractical. First and foremost, having a separate window for IPL would mean taking two months of international cricket out of the picture. 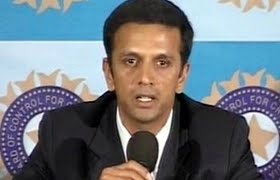 In today’s day and age, when so much of cricket is being played among most top nations, no country would like to miss out on 60 days of their cricketing calendar. The IPL is a successful tournament no doubt, and players from across the globe are eager to take part in the event, but that is only because of the amount of money involved in the league. If the cricketers indeed believe they play more for passion more than moolah, why aren’t the big names part of the Sri Lanka Premier League? Would the Bangladesh and Sri Lankan cricket board have sent their players across to India even though the BCCI doesn’t allow its players to take part in their league, had there not been so much money in the league? Let’s be honest, it’s all about the money.

Also, whatever people might say, at the end of the day, the Indian Premier League (IPL) is basically a domestic cricket league featuring international stars. And, if the IPL organisers are indeed granted a separate window so that top players from around the world can take part in the event, other nations would demand the same. It doesn’t matter if the BPL isn’t as lucrative and even if the SLPL is a flop show. If the Indian domestic league gets a special preference, the other countries would also ask for the same. After all, if a precedent is set, it should be followed uniformly. This is one of the reasons why the ICC has refused to grant permission for a separate window for IPL till now. And by the way, even Pakistan is soon planning to organise its T20 league. So the ICC would have a major headache if they grant India the permission to have a separate premier league.

The second suggestion Dravid made was to shorten the IPL so that other tournaments do not suffer. This recommendation seems a more sensible one, albeit one the organisers would not be too keen to implement, because it would mean either reducing the number of teams or the matches, and that would mean loss of revenue for them. However, if indeed, the organisers are keen to keep the viewer interest alive in the IPL, they need to work a way out to have a swifter tournament. For that though,they need to think beyond monetary gains.