Sri Lanka vs West Indies 1st Test Preview, Live Score: A series is October in Sri Lanka promises a lot of rain, and less of cricket.

A series is October in Sri Lanka promises a lot of rain, and less of cricket. The same has been witnessed almost every time games have been played here during the monsoon season. The prediction for the first Test at Galle, which begins on Wednesday, is not all that great, with rain predicted on almost every day of the Test. As such, one may wonder why so much cricket is played in the island nation during this season. Unfortunately, the cricket schedule is so tight that the Sri Lankan Cricket Board has little option but to fit in games at this time of the year as well. Pity, but that is the harsh reality, and the domestic T20 leagues haven't helped.

If in case the weather relents, and reasonable amount of play is possible, we could have an interesting contest on hands. Of course, Sri Lanka will start as favourites as not only are 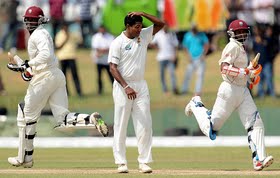 they the more talented side, but will also be playing at home. At the same time, both teams are in a rebuilding phase, and will be looking for positives from the series. The series will be a big Test for captains from both teams. Angelo Mathews may have been at the helm of things for a couple of years now, but this will be his first series as leader without both Kumar Sangakkara and Mahela Jayawardene. As for Jason Holder, he will be debuting as Test leader.

With Sangakkara also gone now, Sri Lanka's batting wears a very unfamiliar look. It is up to the young guns to take up the mantle now. Mathews will be the key in the batting department, as it has been for a while now. Lahiru Thirimanne, Dimuth Karunaratne and Kaushal Silva have gained enough experience to step up and deliver. Their failures won't go unnoticed anymore. Kusal Perera made a brilliant debut against India, and almost starred in a thrilling win. He should find a place along with Dinesh Chamindal, who is beginning to perform to potential. All-rounder Milinda Siriwardana and young wicket-keeper batsman Kusal Mendis will also be seeking opportunities to shine.

In the bowling department, Rangana Herath will once again be the one to watch out for. The left-arm spinner has won many a matches for his side over the years, including one against India recently. He can be quite a handful against the West Indian batsmen, who aren't known to be great players of spin. Tharindu Kaushal, whose doosra has been banned, and Dilruwan Perera are the other spin options for the hosts. In the pace department, they will be led by Dhammika Prasad who has taken on the mantle of the main pacer nicely in recent times. Suranga Lakmal, Nuwan Pradeep and Dushmantha Chameera are the other pace options.

Windies' batting is rather weak in the absence of Shivnarine Chanderpaul. Marlon Samuels will have to do the bulk of the batting along with Darren Bravo. But, their consistency remains a worry. The other batting options include Kraigg Brathwaite, Jermaine Blackwood, Shane Dowrich, Shai Hope and wicket-keeper batsman Denesh Ramdin. In the bowling, Kemar Roach will have to stand up and deliver, but he will seek support from the likes of skipper Holder, Shannon Gabriel and Carlos Brathwaite. Devendra Bishoo's leg spin could also come in handy for the visitors.