The West Indies cricket team is scheduled to play a Twenty20 International (T20I) against a Rest of the World XI team in England on 31 May 2018, to raise funds for stadiums damaged by Hurricane Irma and Hurricane Maria in September 2017.

Top-ranked bowler Rashid Khan of Afghanistan and Bangladesh stars Shakib Al Hasan and Tamim Iqbal have confirmed their participation for the ICC World XI which will play a Twenty20 International match against the West Indies at Lord’s on 31 May. 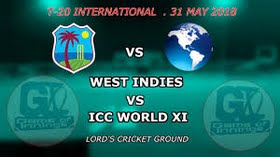 The Windies, reigning ICC World Twenty20 champions, are being led by Carlos Brathwaite and the side includes other top names like Chris Gayle, Marlon Samuels, Samuel Badree and Andre Russell.