In-form New Zealand will take on erratic Pakistan in the Group 2 encounter at Mohali on Tuesday. The Kiwis will go into the match on a high having defeated favourites and hosts India in the first game, and then managing to overcome the Australians as well. With two wins in two, New Zealand are well placed to seal their berth in the semi-final, but they would like to assure the same with a victory against Pakistan. Shahid Afridi’s men go into the contest having lost to India rather badly. They will need to overcome the disappointment, and start afresh again. 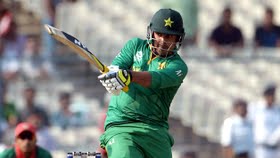 New Zealand did not go into the tournament as favourites, but what has stood out about the team is their tactical acumen, which has taken the opponents by surprise. Against India, their decision to play three spinners was a slightly risky one, but the slow bowlers pulled off things with élan. Even though India were the host side, it were New Zealand who judged the conditions better. Versus Australia as well, they made the big decision to drop Nathan McCullum and bring in Mitchell McClenaghan. And, it was again a masterstroke as the pacer made the match-turning contribution.

While the Kiwis’ bowling has been excellent in both the matches, they would like their batsmen to come up with better contributions. So far, Martin Guptill and Corey Anderson have come up with contrasting 30s in the two matches. But, skipper Kane Williamson is yet to come to the party. He will be looking forward to the Pakistan challenge. The same can be said of Ross Taylor, who has the experience of Indian conditions, but hasn’t quite fired. New Zealand would also seek runs from Colin Munro, who has looked good, but has failed to convert aggressive starts.

Pakistan go into the crucial match against New Zealand with off-field controversy again taking centre stage. There have been numerous reports stating that Shahid Afridi will be sacked as skipper irrespective of how the team performs from hereon. The team’s selection also came under fire against India, as they left out Imad Wasim on a rank turner. If that wasn’t enough rumours surfaced of Umar Akmal requesting Pakistan legend Imran Khan to put in a word for him batting up the order. While this isn’t great news for the team, Pakistan rarely get affected by such stuff as seen in the match against Bangladesh.

At the same time, Pakistan will need to show tremendous improvements in both their batting and bowling. Sharjeel Khan and Ahmed Shehzad must get them off to a good start with the bat. With Umar Akmal and Shoaib Malik in form, and Mohammad Hafeez and Afridi also getting runs against Bangladesh, Pakistan’s batting can definitely do better if they get off to a confident start. In the bowling department, Pakistan will be pleased with the form shown by Mohammad Amir and Mohammad Sami against India, but the performance of Mohammad Irfan and Wahab Riaz is a definite cause of concern. Having lost to India, Pakistan have no option but to go all-out for victory.