Australia should have difficult time against West Indies

The West Indies has the opportunity to show that their T20 World Cup triumph was no mere fluke but an indication of real improvement of a side long in the doldrums. They are scheduled to play five ODIs and a single T20 game, and though both teams shared both the ODI (2-2 with one tied) and T20 (1-1) series early last year in the Caribbean...

The West Indies has the opportunity to show that their T20 World Cup triumph was no mere fluke but an indication of real improvement of a side long in the doldrums. They are scheduled to play five ODIs and a single T20 game, and though both teams shared both the ODI (2-2 with one tied) and T20 (1-1) series early last year in the Caribbean, the West Indies has not tasted victory of any sort in Australia since 1997.And recently they fell 1-2 on tour of Bangladesh. 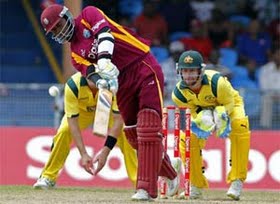 The men from the Caribbean were dealt a severe when in-form batsman and T20 World Cup hero, Marlon Samuels was struck down by an eye injury, and so will not be available for the tour. Not only is the elegant Jamaican capable of a match-turning innings, he is often a flat and miserly spinner who is sometimes employed at the death. It is a big loss.

But it is nothing the West Indies can’t overcome. With the most effective limited overs batsman in residence they will always be in with a chance – no matter the opposition, and they also have other members with the capacity for explosive action. Kieron Pollard’s power is well known, and though the Trinidadian needs to bat for longer periods than he has done recently, opponents are aware of the danger he presents. Allrounders Andre Russell, captain Darren Sammy and Dwayne Bravo are also big hitters in their own right and could pose problems to the Australians.

The West Indies will be hoping the inclusion of the previously out of favour Ramnaresh Sarwan will add some solidity to their potentially volatile batting. Coach Ottis Gibson would have therefore welcomed his 63 in the game against the Prime Minister’s XI as a good sign, for while their swashbuckling batting will sometimes rack up big scores in quick time, they are just as likely to crumble for little in even more quickly. Consistency will be their most significant challenge.

The West Indies bowling will also have to guard against inconsistency. Kemar Roach and Sunil Narine are champion bowlers who can be relied upon much more often than not, and Narine especially, has shown the ability to singlehandedly dismantle line-ups. But Tino Best, Bravo and Russell can be steady one day and sloppy the next. Newcomer Jason Holder is tall and accurate, and may demand some respect on bouncy Australian tracks if he gets an opportunity to play.

The hosts also come into the series with problems of their own. Their record has not been stellar of late, losing the ODI series 0-5 when they travelled to England last summer and just managing a 2-2 tie in the ODIs recently against Sri Lanka while losing the T20 games 0-2.

It has not been easy keeping track of the Australian team due to their adoption of a rotation policy to reduce incidences of injury and to assist in finding the right blend of players to contest the 2015 World Cup. It is somewhat understandable then that their recent play has been uneven. Their aggressive and imaginative captain, Michael Clarke, has been the most sure-footed test batsman of recent times, but his ODI form has been spotty and West Indies will try and prevent it getting any better.

Injury to probably their best limited-overs player, Shane Watson is a serious inconvenience, and the retirement of Michael Hussey would not have helped either. But in David Warner, Australia has a batsman who is probably ranked just below Gayle in destructive ability, and the West Indies will no doubt be very concerned about the damage he may inflict if they fail to limit his opportunities.Fellow opener Phillip Hughes scored two hundreds against Sri Lanka, but he also fell three times for scores less than 10, a problem he will want to address.

Given all that, Darren Sammy’s men have a good chance of putting on a laudable show against higher ranked opponents. For over a decade now Australia has welcomed the West Indies to their shores knowing they had the visitor’s measure. This time it is not as clear-cut. Withthe teams more or less evenly matched, the contests should be enthralling, and it is anybody’s guess as to who will be victorious in the end. A commanding series by the likes of Gayle or Warner or Narine, however, could tilt the balance in their side’s favour.