Steven Finn ruled out of Mumbai Test as well

England for the second Test in a row will miss the services of its fastest bowler Steven Finn. The lanky fast bowler is yet to recover from a thigh injury.

England for the second Test in a row will miss the services of its fastest bowler Steven Finn. The 23-year-old lanky fast bowler is yet to recover from a thigh injury. England though still hope that Finn will play some part in the Test Series and are aiming to play him in the third and fourth Tests.

The visitors had a poor First Test with the three pacers – Anderson, Broad and Bresnan not able to bowl with any fire and their speeds well below par. England though are likely to make one change for the Mumbai Test with left-arm spinner Monty Panesar coming in for Tim Bresnan. 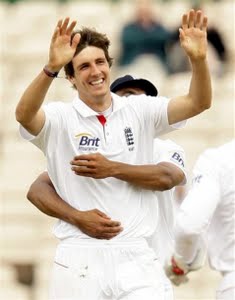 According to the ECB, Steven Finn will stay put with the team in England. He is likely to test his injured thigh in a 3-day match for the England Performance Programme in Mumbai next week. Finn perhaps also has enough time on his hands to recover as the third Test is on December 5th while the fourth and final Test is on the 13th of next month.