Shoaib Malik scores a double century and helped Pakistan reach a mammoth total of 523-8 on day 2 of the first test at Sheikh Zayed Stadium. Visitor’s openers Alastair Cook and Moeen Ali batted solidly to take England to 56 without losing any wicket at the end of day 2. Cook was unbeaten on 39 and with him Moeen Ali was 15 not out as England still trail by 467 runs in the first inning. England’s batsmen will have to bat out of the skin to post any challenge in the match and reduce the margin. They will be hoping that pitch should not help the spinners as it has done on the first two day of the Test match. 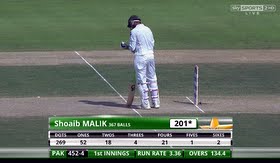 It was a day to remember for Malik as he capped his return to the Test side after a gap of five years with an epic knock of 245, his best score in Test cricket, after coming into bat in the third over of the match on Tuesday. Asad Shafiq scored his ninth Test century and added 248 runs for the fifth wicket with Malik. Pakistan started the day very aggressively and scored 213 runs in the first two sessions of day 2. Malik hit 24 boundaries and four sixes during his 420-ball knock before he smashed a Ben Stokes delivery straight into Ian Bell, who took a well-judged catch at mid-wicket. Shafiq went soon after tea, when he was trapped leg before wicket off seamer Mark Wood while Sarfraz Ahmed (two) and Zulfiqar Babar (nought) also fell to Stokes. Stokes was England's most successful bowler with 4-57 while Anderson took 2-42. Pakistan declared soon after tea, leaving England to bat the remaining 23 overs. James Anderson finished with the most impressive economy rate of all the bowlers (1.90) and figures of 22-7-42-2, while England’s spinners struggled on a pitch many believed might offer them some assistance.

If Cook and Moeen can hang about for the first session tomorrow, then Pakistan will be concerned - on which point, Stokes and Wood did very well after tea to take wickets. For England, they would ideally like their openers to carry their inning as long as possible. Ian Bell and Joe Root will be the key players for England. They have some experience of playing in sub continent otherwise most of their middle order is not very experienced of the conditions.