Cricket South Africa issued an apology after a picture of two of its officials posing with fans wearing Sonny Bill Williams masks in Port Elizabeth surfaced.

Cricket South Africa issued an apology after a picture of two of its officials posing with fans wearing Sonny Bill Williams masks in Port Elizabeth surfaced.

The image has Clive Eksteen and Altaaf Kazi smiling with three supporters, who donned the masks in what seemed like an attempt to taunt David Warner.

To note, Eksteen is CSA’s head of commercial and marketing, while Kazi is the head of communications. 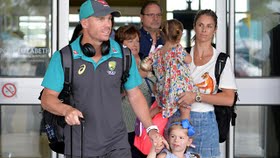 “On behalf of CSA, I extend my sincere apologies to the board of Cricket Australia (CA), its officials, team management, players and their families,” CSA president Chris Nenzani said in a statement.

Candice and Williams are said to have had an association a decade back. “CSA does not associate itself with these actions and urges all Protea supporters from refraining from being involved in distasteful or unwelcome actions that may impact the image of the sport and its supporters,” CSA further said.

The incident comes close on the heels of the Warner-de Kock controversy.