India continued their unbeaten run in the Asia Cup, winning their third game in a row, by beating Sri Lanka by five wickets, at Mirpur on Tuesday

India continued their unbeaten run in the Asia Cup, winning their third game in a row, by beating Sri Lanka by five wickets, at Mirpur on Tuesday. Chasing a reasonable target of 139, India lost openers Shikhar Dhawan and Rohit Sharma early to Nuwan Kulasekara. However, Virat Kohli again guided the Indian innings, first featuring in a steadying half century stand with Suresh Raina (25), and then being the less dominant partner in a 51-run stand with Yuvraj Singh, who played a much-needed rollicking knock, striking a fluent 35 from 18 balls. India lost a couple of wickets towards the end, but Kohli saw them through.

Kulasekara put India in early trouble when he had both Dhawan and Rohit caught behind with the ball moving away from them. Kohli, however, rotated the strike nicely for India, and Raina too gave him good company until he fell trying to hit out first ball against Dasun Shanaka. That brought in Yuvraj to the crease. He announced himself with a crisp driven boundary, but the standout strokes were the loft over long on, and over midwicket, both of which cleared the ropes with ease, against Rangana Herath. Yuvraj fell to the short ball, but Kohli’s unbeaten half-century ensured India a final berth. 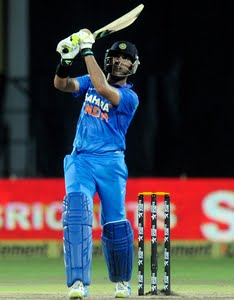 Sri Lanka recovered from a poor start to post a challenging 138 for 9, after being sent in to bat by India. Sri Lanka’s top order again struggled, as they managed only 47 for the loss of three wickets in the first 10 overs. But, they put up a much better show in the second half to double their score in the next 10 overs. After Chamara Kapugedera stopped the glut of wickets with his gritty 30, Milinda Siriwardana chipped in with a good cameo while Thisara Perera, batting at number nine, smashed 17 from merely 6 balls.

Earlier, Sri Lanka were again hurt early through quick wickets. Dinesh Chandimal went in the third over, trying to slog Ashish Nehra’s good length ball over midwicket, but only managing to inside edge one to MS Dhoni. Jasprit Bumrah continued his good run, getting Shehan Jayasuriya to edge another good length delivery behind the wickets. Tillakaratne Dilshan managed to hit a couple of boundaries, but fell to Hardik Pandya, trying to pull the short one, but only succeeding in giving a catch to fine leg. At the end of seven overs, Sri Lanka were in big trouble at 32 for 3.

Skipper Angelo Mathews took on the bowling, and hit Ravindra Jadeja straight down the ground. He proceeded to smash Pandya down the ground, and then pulled one between midwicket and mid-on. The very next delivery though Pandya had his revenge as Mathews played one on trying to run the ball down. Kapugedera struggled to get the big hits, but Milinda Siriwardana came in and smashed Jadeja for a six over his head, and a four courtesy a late glide. Perera then ensured Lanka finished with a flourish, smashing Bumrah for consecutive fours, and lofting Ravichandran Ashwin into the midwicket stands. He was unlucky to be given out stumped, but Nuwan Kulasekara kept the runs coming. They still fell short against a strong Indian batting line-up