On a high after an extremely impressive performance against India, the loss notwithstanding, Afghanistan would look to go one step ahead and upset Bangladesh

On a high after an extremely impressive performance against India, the loss notwithstanding, Afghanistan would look to go one step ahead and upset Bangladesh when the teams face off in match number 31 of World Cup 2019 on Monday at Hampshire Bowl, Southampton

Afghanistan was absolutely brilliant against India and but for Mohammed Shami's last-over hat-trick and Jasprit Bumrah's face-saving spell, Afghanistan might well have been celebrating the most famous day in their cricketing history. The experienced all-rounder Mohammad Nabi was the standout performer for Afghanistan, picking up important wickets with the ball and then taking the team to within the doorsteps of victory with a valiant half-century.

The overall bowling of the Afghanistan team was also highly impressive. Mujeeb ur Rahman and Rashid Khan were particularly thrifty on a pitch that offered plenty of assistance to the slower bowlers. It was the batting that essentially let Afghanistan down against India, as has been the case through the tournament. Many including skipper Gulbadin Naib got starts but their 20s and 30s were not enough to see the team through. 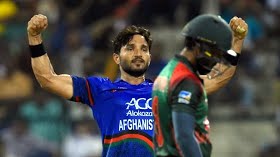 Even though Bangladesh lost to Australia in the previous encounter, they did not go down without a fight. Chasing a mammoth 382, they finished on 333 for 8 courtesy a Mushfiqur Rahim hundred. The biggest plus from the game though was the fact that Bangladesh got rather far without a significant contribution from Shakib Al Hasan, the man of the tournament for them so far. With Tamim Iqbal regaining some touch and Mahmudullah continuing his great run, Bangladesh's batting seems in fine form.

It's the bowling that has been Bangladesh's undoing in most games. Against West Indies, they escaped despite conceding over 320 thanks to a sublime batting display. However, against the defending champions, the Bangladesh bowlers left the batsmen with too much to do. This is one aspect of their game they would need to improve significantly against Afghanistan.