There was a time in England cricket where Tests were all that mattered for the nation that invented the game. In spite of making three World Cup finals, two of them back-to-back, they never woke up to the potential of one-day cricket.

There was a time in England cricket where Tests were all that mattered for the nation that invented the game. In spite of making three World Cup finals, two of them back-to-back, they never woke up to the potential of one-day cricket. Even till as late as last year, the Englishmen did not seem to make serious inroads when it came to their ODI progress. All this culminated in a first-round exit from the World Cup last year. Cut to 2016, the tables have definitely changed. England are no longer pushovers in limited overs, thanks to the change in personnel. Their effort in the first ODI was another progressive step in the same direction.

England's batting on Wednesday was too good for the South Africans, and they clearly outplayed the Proteas although South Africa fought back hard with the bat themselves. England's effort was one that can be declared as a complete all-round show. Jos Buttler was the standout performer. He went into the match having smashed England's fastest ODI hundred the last time he batted in the format for England. That was a couple of months back though. But, the form that Buttler showed in the previous match clearly hadn't deserted the attacking batsman, as he came out all guns blazing.

Even as Buttler was all over the South African bowlers, England's overall batting show was also impressive. There were a number of support acts that aided them in building a score close to 400. Jason Roy got the innings off to a blistering start. Alex Hales had a slow start, but blossomed once he got his eye in. He had put his Test failures behind him. Further, Joe Root held the innings together in the middle overs even as Buttler went berserk. Ben Stokes then came in and delivered the final punching blows. From start to end, England never let South Africa off the hook, and it reflected in the scorecard.

South Africa's bowling was clearly found out as not one of the bowlers went at under seven an over. They were undoubtedly missing a strike bowler in the form of Dale Steyn or Kagiso Rabada. Chris Morris had a massive struggle to keep the runs down, and the story was the same for the others as well. Merchant de Lange went for plentiful runs, and Morne Morkel, even with all his experience, did only slightly better. Spin did not change the team's fortunes as both Imran Tahir and JP Duminy struggled to rein in the Englishmen. The experiment with Farhaan Behardein also did not work. 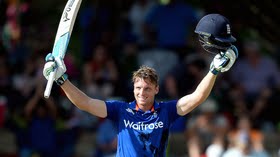 Chasing 400, the only way South Africa could have chased down the target was if they got off to a rollicking start and carried on in quick fashion till the end. Quinton de Kock was brilliant in the chase, carrying on with the form he displayed in India and the final Test against England. His blistering innings, in many ways, outdid the one of Buttler, which was a significant achievement in itself. But, South Africa were unlucky as almost 17 overs were lost due to rain. Faf du Plessis gave Kock good support, but the failures of Hashim Amla and AB de Villiers were major blows for the hosts. In the end, England had too much on the board.