Resurgent Kolkata Knight Riders will face Royal Challengers Bangalore at M. Chinnaswamy Stadium in Bangalore. Both teams will be confident of good performance and we can expect the cracker of a game.

Serious Duke at the Chinnaswamy! #RCBvKKR@SkyCricketpic.twitter.com/ClTNmU1JBy 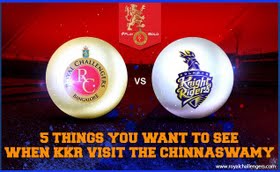 Kolkata Knight Riders will again look to ride on the good form of their openers. With Robin Uthappa coming to party in the last two games, team management would feel little relief now. He had showed last year that how devastating he could be if he is in good touch. Middle order will be a little concern for them as they have not fired in this season. Manish Pandey is certainly struggling with his form and he would like to get some run in front of his home crowd. Surya Kumar Yadav too hasn’t scored any significant score in last few matches as he has found fielders on the fence most of the times. Other than that, KKR looks very balanced with lower middle order hitting some big blows. Brad Hogg had an excellent match against CSK and he would like to continue against RCB too. He is not only restricting the scoring but also chipping in with wicket at the crucial juncture of the game. Pat Cummins has not lived on his expectations, so he may give way to Morne Morkel. Apart from this, not much change is expected in playing XI.

For Royal Challengers Bangalore, there top three will have to do bulk of scoring as they do not have enough fire in the lower middle order. Though Sarfaraz Khan will be confident after the cameo in the last match against Rajasthan Royals but ideally the trio of Chris Gayle, Virat Kohli and AB De Villiers would not want to leave the game that late. Dinesh Karthik has still not justified his price money and would be eager to win a game for his team. With Mitchell Starc back in the team, their bowling attack is looking good. David Wiese and Varun Aaron is also among the wickets, RCB has finally found their best team combination. With team doing good, RCB won’t tease with the winning combination. The only possible change looking from here is Yuzuvendra Chahal can replace Iqbal Abdulla in the final XI if he fully fit.

Chris Gayle was absolutely brilliant when these two teams played each other last time in Kolkata and he won the game single handedly for RCB. Now it time for KKR to turn the table and upset RCB at their home ground.