So the action now moves to the Feroz Shah Kotla in Delhi for the fourth and final test of the Border/Gavaskar trophy series. The hosts, up 3-0, will have visions of a 4-0 clean sweep in mind, if for no other reason than to avenge the 0-4 humiliation that was dished out to them the last time they grappled down under.

So the action now moves to the Feroz Shah Kotla in Delhi for the fourth and final test of the Border/Gavaskar trophy series. The hosts, up 3-0, will have visions of a 4-0 clean sweep in mind, if for no other reason than to avenge the 0-4 humiliation that was dished out to them the last time they grappled down under.

The Visitors, on the other hand, will be sorely disappointed with their sorry performance. Outplayed in all departments, they never found themselves in a position from which victory seemed feasible in any of the three games.Additionally, the very public airing of their internal difficulties prior to the third testattracted no end of second-guessing and ridicule and would not have helped their cause either.

Mohali was supposed to have provided the Australians with their best chance of victory. And though their first innings total of 408 should have allowed them to avoid defeat at least, Michael Clarke and his men would not have contemplated the mayhem that was unleashed by debutant Shikhar Dhawan. Nobody could have thought that a man playing his first test could have totally shredded the Australian bowling, blasting 187 off just 174 deliveries. 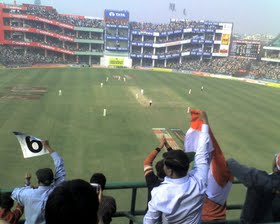 “Blasting” actually does him a disservice, for there was nothing belligerent about the way he played.The Australian attack was simply dismembered by a stunning succession of stately strokes. The upright left-hander was a revelation, and his 289-run opening stand with Murali Vijay -- who himself stroked a big hundred -- made in only 60 overs, catapulted India to a place from where they could press for victory. The Indian innings then fell away, to some degree, but Virat Kohli ensured that the eventual lead – 91 -- was substantial.

But if Dhawan’s onslaught left the Australians limping, Bhuvneshwar Kumar crippled them with an incisive eight-over burst late on the fourth evening with the new ball. The Indian swing merchant quashed the threat of David warner, Ed Cowan and Steve Smith to leave the visitors dangling at a precarious 75/3 – the heart of their vulnerable batting exposed. Next day, Jadeja, Ashwin and Ojha pressed home a triumph that would have further deflated the tourists.

The Delhi test begins on Friday, and with Dhawan out injured India will have to press opener Ajinkya Rahane into service. Australia will also have changes thrust upon them. Mitchell Starc, who triggered something of a collapse in the first innings with two quick wickets with the second new ball, and who compiled a very competent 99, will return to Australia for surgery to his ankle. Michael Clarke, with his bad back, is also in danger of missing the game.

But the news for the visitors is not all bad: Shane Watson -- one of the disobedient four -- having completed his punishment, will be available, while another, fast bowler James Pattinson, will also return. Pattinson was Australia’s best bowler in the first two tests and though it was unfortunate that he had to sit out the Mohali test, he should be fully refreshed for the coming encounter.

The Feroz Shah Kotla has had a storied past. It is the second oldest international cricket venue in India and the home team has seen more success there than at any other ground in the country. Yet it has had its problems too. Most notably, the venue was prohibited from hosting international matches for a year when in December 2009 an ODI between India and Sri Lanka was curtailed because the surface was deemed unfit for play.

There could be some runs to be scored in Delhi. The last two Ranji Trophy games at the venue in November 2012 saw three scores of over 500, with nine batsmen compiling hundreds. If that trend continues then the Australians might at least have a chance to come away with a draw, which would prevent a 4-0 drubbing.

Like most other grounds in India, spin has been the weapon of choice at Kotla. Still, the pitch has not been totally unkind to seam bowlers. Seamers have held their own in recent Ranji Trophy games, and though Ashwin and Ojha took 16 of 20 West Indies wickets in the last test held there in November 2011, there was some reverse swing on offer. Using a ball 46 overs old, Fidel Edwards breached “The Wall” by wickedly snaking a delivery from outside off to find a path between bat and pad, uprooting two of his stumps. And though the Indian batsmen were able to withstand the West Indian pacers to successfully chase 275 while losing five wickets in the second innings, the deviation of the ball through the air would have triggered some concern. If the conditions similarly smile on the Australian pacers then they could cause some jitters and make for a more even contest.

All things considered, however, Australia will have to substantially raise their game to if they are to leave the subcontinent with a victory. Aside from Michael Clarke, who might not make it to Delhi, their batsmen have not shown that they have what it takes to counteract good quality spin in helpful conditions.

The Australian pacers, for the most part, have striven manfully, but the subcontinent environment was unlikely to allow them a huge impact on the series. What the Australians needed to compete were high quality spin bowling, and unlike the recently triumphant England side, that is exactly what they lack. They will have to endure another long five days in Delhi.