Yuvraj, Harbhajan back in Test Squad

Yuvraj Singh has forced his way back in the Indian Test team after showing good progress in the first-class games he has played along with the T20Is in his cricketing comeback.

Yuvraj Singh has forced his way back in the Indian Test team after showing good progress in the first-class games he has played along with the T20Is in his cricketing comeback. Yuvraj as we know had recovered from a rare germ cancer following which he was out of action for about a year since the 2011 World Cup.

The 30-year-old southpaw had not done anything special with the bat during the T20 World Cup but followed it up with a swashbuckling double hundred in Duleep Trophy. Yuvraj once again proved his fitness for the longer game by playing for India A in a 3-day match against the touring England team where he scored a fifty and got amongst the wickets. Yuvraj has won the competition for the no.6 slot in the Indian team left open by the retirement of VVS Laxman. Suresh Raina and S Badrinath who were competing for the same lost it to Yuvraj who brings the added value of being a decent left-arm spinner. 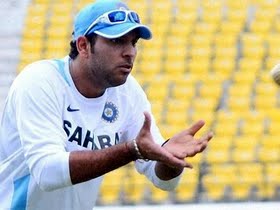 Yuvraj Singh’s last Test match was against West Indies in November last year. Although the left hander has played many match winning knocks for his country ever since making his international debut in 2000, the 30-year-old Yuvraj is yet to establish himself as a world class Test player. He has so far played in 37 Tests till date and has got 3 100s and 10 50s with a modest average of 34.80. Yuvraj is also yet to prove himself in Tests played in overseas conditions. For some reasons though the left-hander isn’t playing for Punjab in the ongoing Ranji Match against Hyderabad.

Apart from Yuvraj, the most notable inclusion in the Test Squad is that of Harbhajan Singh’s. It is appearing that the Indian team management is contemplating of playing with three spinners in the playing XI with R Ashwin, Pragyan Ojha selecting themselves while the experienced Harbhajan Singh also getting a berth to complete the trio. India seems to be replicating what it did under Mohammad Azharuddin in 1992 when it whitewashed the Graham Gooch led England 3-0 on dusty bowls using a spin trio.

The Selectors have included Ishant Sharma as the third pacer after Zaheer Khan and Umesh Yadav. While Ishant is likely to sit out, Zaheer Khan could be doubtful to play in the first Test as he left the field in the middle of an over in Mumbai’s Ranji match against Railways following some discomfort in the groin region. Zaheer has also been in very modest form of late and the better option for India would be Umesh Yadav as the lone pacer if Dhoni decides to play three spinners in the XI.

Led by Sandeep Patil, the Selectors have named as many as four opening batsmen! While Tamil Nadu’s Murali Vijay gets a recall, Mumbai’s Ajinkya Rahane has been retained. The Delhi duo of Virender Sehwag and Gambhir are likely to keep their places in the XI though but will be under immense pressure to score the big runs. The opening Test of the 4-match Series against England gets underway on the 15th at the Sardar Patel Stadium in Motera, Ahmedabad. The Squad announced today is for this 1st Test and the 2nd Test at Mumbai.