The performance of India’s batsmen in the first ODI against Pakistan at Chennai was shambolic to say the least. Agreed, they had to deal with extremely tough conditions and some exceptionally scything bowling.

The performance of India’s batsmen in the first ODI against Pakistan at Chennai was shambolic to say the least. Agreed, they had to deal with extremely tough conditions and some exceptionally scything bowling. Still, one must say that the way India’s top five batsmen got out was unacceptable. It was almost a carbon copy as Virender Sehwag, Gautam Gambhir, Virat Kohli and Yuvraj Singh got knocked over one after the other. It is very easy to slam bowlers all over the park when there is nothing in thepitch for the bowlers. The temperament and technique of a batsman actually comes to a fore when he is presented with bowler-friendly conditions like the one the Indians encountered at Chennai, under overcast skies. Sadly, the Indians were found short on both counts. 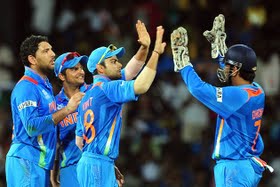 While it must be acknowledged that Junaid Khan was rewarded for his deadly spell, none of the Indian batsmen seemed prepare to take up the challenge that was offered. The need of the hour once India were put into bat under trying circumstances was for the batters to see off the initial few overs, even if that meant maintaining a low run-rate. They should have presented dead bats and saved their wickets from destruction. Instead, they seemed to have to have forgotten that they were playing a 50-over game. Most batsmen played shots as if this was a 20-over clash. In a sense, one can’t blame them since they hardly play ODIs these days, being so busy with T20s, IPLs and CLT20s etc!

Their lack of interest in putting up a fight was pretty much evident. Once Sehwag fell early, playing all over a swinging delivery, the rest needed to take a cue from his dismissal and adopt caution. Instead, Gambhir also played an airy-fairly shot being clueless as to where the ball was heading. Ditto with Virat Kohli and Yuvraj Singh, who completely played down the wrong line. The dismissal of Rohit Sharma was even more shocking. He just held his bat out at an away-going delivery, when he could have easily let it go, he should have under the circumstances.

Although M S Dhoni played the innings of the match, also one of the greatest ever in the format, it was, at the same time, a vindication of the fact that with the proper mindset one can survive on a seemingly unplayable pitch like the one at Chennai. Dhoni doesn’t have a great technique, but he adapted to the conditions and the situations wonderfully well, not pushing at the ball like some of the earlier batsmen did, fatally. The Indian captain came into bat inside the first ten overs, when the ball was still moving around prodigiously, but proved to his teammates how the deal with challenging circumstances.

In spite of Dhoni’s heroics, Pakistan were always going to get home since India, as often mentioned, lack the bowling firepower. Effective, India lost the opening ODI inside the first hour. The only way they can improve and hope to do better in the remaining two ODIs is by standing up to the Pakistan bowlers at the start of the innings.