Australia on the backfoot in reply to SA's 450

South Africa are in the driver’s seat in the Gabba Test after taking three quick wickets to rock the Australian top order. However, by the close of a long third day’s play...

South Africa are in the driver’s seat in the Gabba Test after taking three quick wickets to rock the Australian top order. However, by the close of a long third day’s play, the hosts have recovered to 111 for 3 in 26 overs with opener Ed Cowan on an unbeaten 49 (from 74 balls with 8 fours) with Skipper Michael Clarke who is on 34* (from 57 balls with 5 fours).

The homeside was in all sorts of trouble at 40 for 3 when Ricky Ponting jabbed at a bouncy length delivery off Morne Morkel into the slips for a duck. Prior to that, the Aussies lost the wicket of David Warner (4, caught in the slips off Steyn) and an aggressive looking Quiney (9, hooking Morkel into the hands of Steyn at long leg with the fielder converting a possible six into a great catch). 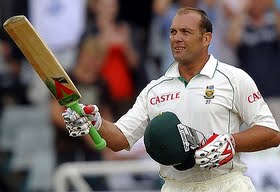 By the close of play, SA would have had their fourth wicket with Cowan gloving a rising delivery down the legside but survived with Morne Morkel bowling a noball.

Tea Report: South Africa are 434 for 7 in 148 overs at Tea on Day 3. James Pattinson took back to back wickets to dent the Proteas’ progress.

Pattinson first removed centurion Jacques Kallis who got nicely caught by debutant Rob Quiney at gully in an attempted cut shot. Kallis fell after piling up 147 (from 274 balls with 14 fours and a six). In his next over, Pattinson picked up the wicket of AB de Villiers (40 from 84 balls with 5 fours) when he played an uppish cut which was caught by the diving Warner at point.

By Tea time, the Aussies got two more wickets with Philander caught in the slips off Siddle and then a well set Jacques Rudolph (31 from 69 balls with 3 fours) slicing a cover drive off Nathan Lyon into the hands of Quiney.

Lunch Report: South Africa finished an extended morning session on Day 3 of the Gabba Test at 357 for 3 in 120 overs. Play started 30 minutes early to make up for the loss of time on the first two days. The weather was slightly overcast but it held up nicely to allow 38 overs in the morning session.

Both Hashim Amla and Jacques Kallis saw through the second new ball and in the process brought up their respective hundreds. Hashim Amla, who got to his 17th Test Century was finally dismissed when Peter Siddle got a length delivery to zip through and hit the pad infront of middle for an lbw. Amla (104 from 244 balls with 7 fours and a six) would have been not out had he asked for a review as the ball was sailing over the top of the stumps.

Australia couldn’t find any more success after breaking the 165-run third wicket stand as AB de Villiers joined Kallis and saw SA through to Lunch safely. AB de Villiers collected 32* (from 71 balls with 4 fours) while Kallis is on 137* (from 257 balls with 13 fours and a six). The South Africans are still going along at a steady rate with the morning session yielding only 102 runs in 38 overs.