Usman Khawaja hit 58 from 45 as Australia beat Bangladesh by three wickets in a hard-fought contest at the Chinnaswamy Stadium in Bangalore on Monday. Chasing a challenging target of 157, Australia got off to a blazing start, with Khawaja and Shane Watson adding 62 for the first wicket in 7.2 overs. After the opening pair was separated, wickets kept falling at steady intervals, but Khawaja’s knock was enough to take them home. For Bangladesh, Mahmudullah smashed an impressive unbeaten 49 from 27 balls, with seven fours and a six as Bangladesh recovered from a poor start to post a decent 156 for 5. 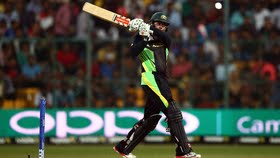 Khawaja kicked off the chase by slamming Mashrafe Mortaza for six straight down the ground fourth ball of innings. Later in the innings, he also took on Shakib Al Hasan, getting three fours off him, through midwicket, extra cover and short leg. At the other end, Watson took on Saqlain Sajib and lofted him high over midwicket for a maximum. He, however, underestimated Bangladesh’s fielding and got himself run out, Khawaja continued to attack and got to his fifty with a cracking stroke through backward point. Bangladesh fought back once he was dismissed, but Australia managed to scrape through to victory.

At one stage, Bangladesh were struggling at 62 for 3, having lost key batsmen like Soumya Sarkar and Sabbir Rahman. They were dealt with a big blow in the build-up to the game as the injured Tamim Iqbal was ruled out, and Mohammad Mithun was brought out to open. As such, Bangladesh were hoping for contributions from their experienced players which came in the form of Mahmudullah’s blazing knock, and Shakib Al Hasan’s 33.

Mahmudullah came into bat after the halfway stage, but was in his elements right from the start. He timed John Hastings for a four through point, and pulled the same bowler over square leg next ball. Towards the end of the innings, he took on death overs specialist James Faulkner and slammed him for three consecutive fours – blasting one past backward point, then placing one through the point region, and then eventually swiping the bowler for another four over square leg. When Shane Watson came back, Mahmudullah took him for three fours. He ensured Bangladesh crossed 150, by smashing Nathan Coulter-Nile for fours to long-off and deep midwicket in the last over.

While the end was impressive, the start for Bangladesh was equally disastrous. Sarkar cut what would have been a definite wide delivery from Watson straight to point, having made just 1. Rahman managed a couple of fours off Hastings, but was foxed smartly by Watson as he hit one up in the air. Mithun looked good as he blasted Mitchell Marsh for a big six over wide long-on, before hitting a long hop from Adam Zampa (3 for 23) to deep midwicket. Shakib, at the other hand, held things together, blasting Glenn Maxwell for a four and a six through extra cover and long-on. He began the fight back for Bangladesh, which was completed by Mahmudullah.