On a day truncated by a soggy outfield and poor overall weather conditions, India Blue extended their advantage over India Red even further.

On a day truncated by a soggy outfield and poor overall weather conditions, India Blue extended their advantage over India Red even further. The first half of the day was lost due to unplayable conditions, but only 26 balls were bowled before problems with run up forced another delay.

When play eventually resumed another 28.4 overs were possible, during which opener Mayank Agarwal hit a fluent fifty, his second of the match, as India Blue finished the day at 139 for 3, with a massive lead of 476. It remains to be seen whether they go for an overnight declaration to make a match out of it.

Gautam Gambhir and Agarwal again began confidently, taking on the struggling duo of Pradeep Sangwan and Nathu Singh, dealing in a number of boundaries. The pace bowlers yet again got their lines wrong and were duly punished for their transgressions. 32 runs came in 26 balls, in the short period before play was called off.

When play resumed again, Kuldeep Yadav gave Red some reasons to cheer. He constantly beat the edge of Gambhir's bat, and even managed to produce an edge which, unfortunately, did not carry to the fielder. Yadav eventually had his man when he got one to drift and straighten to beat Gambhir, and trap him in front of the stumps. Following the dismissal of Gambhir, Rohit Sharma, who is desperate for runs, was sent in ahead of Cheteshwar Pujara. 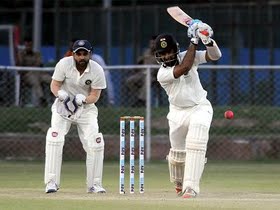 At the other end, Agarwal went on to complete his fifty with six fours. Not all of them were convincing, but with Blue so ahead in the game, he could throw his bat around. He eventually fell to Kuldeep, slog sweeping the spinner, and hitting him to Nathu at midwicket.

Amit Mishra got an easy wicket when Dinesh Karthik charged down the pitch and was stumped. As the day's play neared close, Rohit enjoyed himself with a six down the ground off Yadav. He had Ravindra Jadeja for company at stumps.