Former New Zealand captain Brendon McCullum delivered the MCC Spirit of Cricket lecture in honour of Colin Cowdrey at Lord's on Monday. Here’s a look at some important points he made during his speech

Former New Zealand captain Brendon McCullum delivered the MCC Spirit of Cricket lecture in honour of Colin Cowdrey at Lord's on Monday. Here’s a look at some important points he made during his speech. 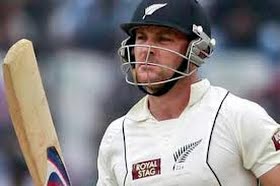 On Colin Cowdrey: I never saw him (Colin Cowdrey) play, but he was one of the first great players I remember becoming aware of as a boy. My friend and lawyer, Garth Gallaway, who is here this evening, remembers the England side touring New Zealand in 1970-71. Cowdrey, a man of the church, missed the first Test in Christchurch through illness and travelled to Dunedin at the invitation of Garth's father, Iain, to preach at St Paul's Cathedral. He had dinner at the Gallaway home and brought with him the Telegraph cricket correspondent, Michael Melford - and Cowdrey and Melford spent an hour on the back lawn bowling to seven-year-old Garth.

Young and brash: In the early days of my international career I was proud to be called ‘brash, aggressive and perhaps even arrogant. When I first made the New Zealand ODI team, there were at least a couple of guys who were my heroes who had a swagger and sense of entitlement and arrogance about them. Did I want to be like them? You bet I did! I became incredibly competitive; winning was everything and I didn't really care what it took to win. I now look back on that part of my game with regret. There are many things I would change if I could.

Controversial Murali run-out: We were playing Sri Lanka at Lancaster Park in Christchurch in late 2006. Kumar Sangakkara scored a magnificent 100 in the second innings. When Kumar reached his 100, Sri Lanka were nine down - the ball was still in the air being returned to me as wicketkeeper when Murali left his ground to congratulate Kumar. When the ball arrived in my gloves, I removed the bails and appealed. Murali was given out and we went on to win the match. Not surprisingly, the incident created controversy and bad feelings. The Sri Lankans were stunned. Their captain Mahela Jayawardene said at the time: "Legally it was run out, the ball was alive, but we play in an age where we talk about the spirit of the game. Hopefully it won't happen again. It's not the way to play cricket."

Phil Hughes’s death: On hearing of Phil Hughes’ death, my initial attitude was that we shouldn't be playing. I looked around the dressing room and felt that no one wanted to be playing cricket. It had lost all meaning. There was also the realisation that it could have been any one of us. None of us ever anticipated that someone could die from a cricket ball, not in this day and age. I always wanted our fast bowlers roaring in, having a winning attitude; intimidating, ready to exploit any lack of certainty or technique in a batsman, but not at the expense of someone's life. Cricket was meant to be a game, not a life or death struggle. It hit us all hard that for Phil, it had become exactly that.

Match-fixing inquiry: Looking back on this, I am very surprised by what I perceive to be a very casual approach to gathering evidence. I was reporting two approaches by a former international star of the game. I was not asked to elaborate on anything I said and I signed a statement that was essentially nothing more than a skeleton outline. Needless to say, by the time I sat in the witness box in London in October 2015, I had made three statements in relation to the issues. The second statement was requested by the ICC's anti-corruption unit much later on - a clear indication that my first statement was inadequate - but how on earth could I have known that. As a player I had reported an approach - and it was recorded sparsely by the person I reported to.

Watch the full lecture below