Cook, Pietersen put the pressure back on India

England have gained the upper hand over India in the Wankhede Test at Mumbai by finishing Day 2 at a strong position of 178 for 2 in 65 overs.

England have gained the upper hand over India in the Wankhede Test at Mumbai by finishing Day 2 at a strong position of 178 for 2 in 65 overs. A superb third wicket partnership between Cook and Pietersen has brought down the England’s first innings deficit down to 149 runs by stumps.

India struggled to breakthrough in the entire final session as Pietersen batted majestically and threatened to take the game away from them with his dominating strokeplay. Cook kept his end intact with a mixture of solid defence and powerful sweeps and cut shots. The English Skipper remained unbeaten on 87 (from 209 balls with 10 fours and a six) while Pietersen blazed away to 62* (from 85 balls with 9 fours). The experienced pair have put up an unbroken stand of 110 runs in 31 overs. 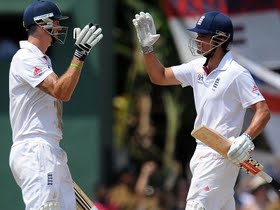 Tea Report: Pragyan Ojha spoilt England’s wonderful opening start by claiming two wickets just minutes before Tea. England were otherwise going along nicely at 66 for no loss before Ojha in a second spell picked up the wickets of Nick Compton and Jonathan Trott. At Tea, England are under pressure at 77 for 2 in 36 overs. Skipper Alastair Cook has looked solid though with his 43* (from 115 balls with 6 fours and a six). He has just been joined by Kevin Pietersen (5*). The visitors have a deficit of 250 runs to wipe off.

The afternoon session saw MS Dhoni use all his bowling options but the pitch showed no signs of any tremors from the spinners. Cook and Compton patiently saw through any threat and got India worried with their opening stand. In the 32nd over, Pragyan Ojha delivered the breakthrough when Compton (29 from 90 balls) decided to defend rather than drive at a full ball which turned away sharply to force a low catch at slip to Sehwag. Next man Jonathan Trott was beaten by the turn from Ojha and in the next ball, the no.3 decided to go back to cover for the spin, but it was a brilliantly disguised full length arm ball that struck his pad dead infront of middle for an lbw. Trott was out for a second duck of this series.

Lunch Report: England negotiated four overs of spin before lunch without losing any wickets. This was after they had bowled out India for 327 just about 20 minutes before the lunch break.

The visitors took about 35 minutes to break the overnight partnership for the 7th wicket. The breakthrough came when R Ashwin (68 from 114 balls with 9 fours) was struck plumb infront of off by a deadly arm ball from Monty Panesar to defeat an attempted square cut. Ashwin had done a great job by putting up a crucial stand of 111 with Pujara. Harbhajan Singh came in and made a useful 21 (from 35 balls with 2 fours and a six) before he got a long way across the stumps in a flick to get lbw to a quicker one from Graeme Swann.

Centurion Cheteshwar Pujara finally got out when he came down the track and was beaten in the flight by Graeme Swann. Puajra (135 from 350 balls with 12 fours) tried to make the adjustment with an attempted defence but the ball had straightened past his outside edge to have him stumped. Zaheer Khan was the last man dismissed after he had struck a couple of useful blows. The no. 10 was wrongly given caught bat pad off Swann by Aleem Dar.

Build Up to Day 2: India hold the advantage of posting 266 on the board and with still some batting left would like to get to 320 or so on a pitch that has been consistently turning with sharp bounce. All eyes will be on how the English batsmen fare against the spin trio of India and it will not be an easy task at all.

The pitch on Day 2 is likely to be quicker than what it was on Day 1 because of the lack of moisture. There is a bit more grass on the surface and there are plenty of spots for the spinners to make use of. Batting is expected to be tougher in the morning and the afternoon sessions but the pitch is likely to be easier for the batsmen in the final session.