RCB through to the playoffs as the game against DD washed out.

The clash between Royal Challengers Bangalore and Sunrisers Hyderabad washed out due to rain at Chinnaswamy Stadium, Bangalore.

The clash between Royal Challengers Bangalore and Sunrisers Hyderabad washed out due to rain at Chinnaswamy Stadium, Bangalore. By virtue of this, Royal Challengers are through to the Playoffs of the eighth edition of the Indian Premier League. 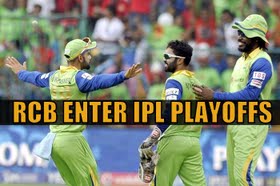 Royal Challengers Bangalore skipper, Virat Kohli won the toss and invited Daredevils to bat. DD bated superbly and scored 187/5 in their quota of 20 overs. De Kock and Duminy hammered quick half century of help DD reach a mammoth total. Delhi Daredevils made a brisk start as openers Quinton de Kock and Shreyas Iyer scored runs very quickly in the mandatory powerplay. They added 55 runs for the first wicket before Iyer was caught by Gayle at points off Harshal Patel. JP Duminy came in to bat at no. 3 and the next five overs were even better for the Daredevils as they accumulated 55 runs in that. De Kock laced nine boundaries and three six in his 69 runs inning off 39 deliveries. After the de Kock’s dismissal, DD did struggle to maintain the momentum and they lost some quick wickets in the process. Yuvraj Singh, Kedhar Jadhav and Angelo Mathews perished without making any significant contribution. Duminy finished the inning on a high note with 43-balls 67- runs where he smacked four fours and three sixes.

In reply of 187/5, Royal Challengers openers Chris Gayle and Virat Kohli played the first over cautiously. The rain started then it got heavier that no play was possible after one ball of the second over. RCB were at two without losing any wicket then.

No play was possible after that and was rightly called off. Both teams shared one points each. This game didn’t make any effect on the status of Daredevils on the points table but it was a vital game for the RCB. But with one points, Royal Challengers Bangalore are through to the playoffs and they will possibly play against Rajasthan Royals in the eliminators.