India’s decision to go in with four spinners for the Nagpur Test is quite an interesting choice. While, on one hand, it seems that they are willing to experiment, on the other hand, it is also an indication that the Indians are now in a desperate state of mind.

India’s decision to go in with four spinners for the Nagpur Test is quite an interesting choice. While, on one hand, it seems that they are willing to experiment, on the other hand, it is also an indication that the Indians are now in a desperate state of mind. They have, in all probability, run out of ideas over how to stop the rut that has set into their game, and thus the decision to play four spinners, against all odds, was taken. At the outset it definitely isn’t a well-thought out strategy, but a move made more out of hope that at least this works.

Just trying out something new however won’t be enough for the Indians to regain their lost and pretty much forgotten winning touch. The most significant part will be to try and bowl out England as early as possible in the first innings. From what has been on show so far, they haven’t been exceptionally good. They bowled tightly on day one, but considering the number of early wickets they got, they should have ended with more scalps. Instead, as they have often done in the series, they have allowed the Englishmen to stage a comeback.

Earlier, India tried to counter England by playing on their perceived weakness and asking for rank turners. That policy backfired miserably, and now they are making an endeavour to minimise advantage England have gained through Monty Panesar and Graeme Swann by playing double the number of quality spinners that the visitors possess. The move will however only work if the Indian batsmen put up a better show against the English spin duo. The failure of the much-vaunted batting line, known to be very good players of spin, is one of the key reasons why India find themselves completely on the back foot for the moment. 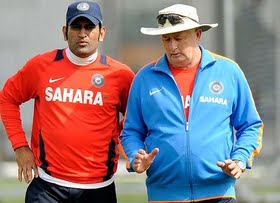 While the overrated batsmen have struggled, it is also equally true that Ravichandran Ashwin and Pragyan Ojh have failed to live up to the early promise they displayed at Motera. Had they done better, India would definitely have not gone in with three spinners at Mumbai and four now in Nagpur. The decision at Mumbai saw once lead spinner Harbhajan Singh being terribly under-bowled. Unless M S Dhoni is very smart in the manner he operates his bowlers, the blunder could be repeated, and this time two spinners could be at the receiving end.

Where India could benefit from four spinners in the game is if they have a lot of runs to bowl against in the second innings. For that though India would have to clean up England before 350 and then themselves score 550-600. This will be extremely significant in the sense that the home side would be batting fourth in the Test, and anything between 150-200 could be extremely tricky. The pitch is expected to start turning from the second day itself, and if the Indians want to turn things around, their spinners will need to start firing right away.