On paper, Chennai Super Kings are definitely stronger that Rajasthan Royals. But when it comes to games at home, the Royals can get the better of the best of sides. Their recent record at Jaipur speaks for itself.

On paper, Chennai Super Kings are definitely stronger that Rajasthan Royals. But when it comes to games at home, the Royals can get the better of the best of sides. Their recent record at Jaipur speaks for itself. Starting with this year’s IPL, they have been unbeaten at home over 12 games. The Royals tasted victory rather convincingly in all the group matches held during the ongoing tournament. They head into the semis on a high, having defeated the in-form Otago in their last league clash. As such they should be high on confidence going into the game against Chennai. 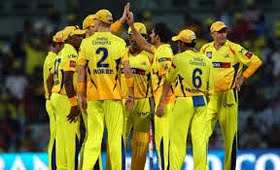 The strength of the Royals in the series has been their consistent all round performance, and they will need to continue with the same if they want to get the better of CSK and head into the final. In the batting department, apart from skipper Rahul Dravid almost everyone has made significant contributions. Ajinkya Rahane has been steady at the top, coming up with a couple of impressive half-centuries, Sanju Samson has continued to prosper, carrying on from where he left in the IPL. Shane Watson and Stuart Binny have come up with quick runs whenever needed.

Above all, the veteran Brad Hodge has been most exceptional. He has come up with two stunning knocks over the course of the series. Hodge has a lot of T20 experience and he has helped the Royals’ cause on numerous occasions. The hosts would be expecting a lot from Hodge in the semi-finals as well. Even in the bowling department, the Royals have plenty to be positive about. Kevon Cooper has picked up wickets at will with his skill, Vikramjeet Malik has sparkled every time he has been given an opportunity while 41-year-old leggie Pravin Tamble has been extremely proficient.

Like the Royals, Chennai have also been highly successful as always. Only a poor performance against Trinidad & Tobago prevented them from finishing with four wins out of four. Chennai though are adept at putting poor performances behind them, and thus would approach the semi-final as if the loss against T & T never happened. Most of the batsmen from their top and middle order have been in spanking form. Opener Michael Hussey has come up with his usual match-winning knocks, and while his partner Murali Vijay hasn’t excelled, he has got a couple of starts. Also, Vijay is someone who has fired in the big games in the past.

The great form of MS Dhoni and Suresh Raina will definitely encourage Chennai. These are in fact the two batsmen who could break the stranglehold the Royals’ bowlers have had on most teams. Dwayne Bravo’s all-round presence will be crucial as always since he has change the course of the match with either of his skills. A definite cause of worry for Chennai would be the form of Ravindra Jadeja, who hasn’t contributed much in any discipline. Their overall bowling has been decent. Owing to the past big-match experience, they would hold a slight edge over the Royals in spite of the latter’s unbeaten run.