World Cup 2019: You have to keep trying, you can't go away: du Plessis after South Africa were knocked out

South Africa skipper Faf du Plessis admitted that he is embarrassed by his side's performance in this year's World Cup, but added that he is not quitting and will fight on.

The Proteas were set a 300 plus target by Pakistan built around Haris Sohail's blazing 89. However, despite a decent start, they were never in the hunt and eventually fell short by 49 runs, as Pakistan stayed alive.

"The results we're dishing out at the moment are a little embarrassing. But as players, we need to front up to this challenge and I need to be part of that," said Du Plessis after South Africa failed to make the knock-outs for only the second time in their World Cup history.

Du Plessis said, despite the hurtful loss, he will stay on and the captain and try to bring the team back on track. "I'm a very proud player and the captain and playing for South Africa means a lot to me. You have to keep trying, you can't go away. For me as captain, I can't retreat into the background," he explained.

"The fact we're playing below our level really chips away at me," was another candid admission by the South African skipper. 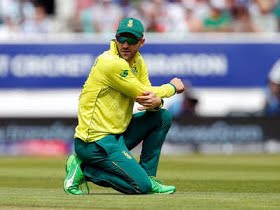 Du Plessis also went on to reveal that he as well as the team management had tried to stop Kagiso Rabada from playing this year's IPL keeping the World Cup in mind. Rabada has only managed six wickets in the competition so far at an average of over 50.

"We did try and get him not to go to the IPL; to try and stay and get fresh. That wasn't the case of, and then when he went there, we were like, let's try and get him back halfway through the IPL because it's important, not just for him, but a few other players.

"I mean, I spoke about it before the IPL even started, that it's important that we try and find space to rest our three-format players because they play all the formats all the time, and then IPL," admitted du Plessis on the workload on players.