Virender Sehwag must build on great start to England series

No matter what people say about the pitch at Motera, the fact of the matter is that Virender Sehwag got his much awaited century on the opening day of the first Test at Ahmedabad.

No matter what people say about the pitch at Motera, the fact of the matter is that Virender Sehwag got his much awaited century on the opening day of the first Test at Ahmedabad. It was exactly the kind of start India needed to the series, and Sehwag provided plenty of entertainment in his own inimitable style en route to a run-a-ball century, his 23rd in Test cricket, and first in nearly two years. What Sehwag’s century has done is set up the first Test very nicely for India. If the rest of the Indian batting line up can continue the good work started by Sehwag, they should find themselves in a comfortable position in the coming days. 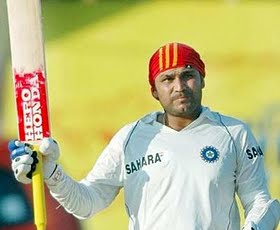 While it is great to witness Sehwag getting a century after such a long gap, it is important for him to realise that this is only the beginning of the series, and that there is a long way to go. Very often in the recent past, the Indian opener has had the tendency to begin a tournament with a bang, but taper off as the matches progress. The 2011 World Cup was a perfect illustration of this Sehwag tendency. The Delhi dasher kicked off the tournament with a magnificent 175 against Bangladesh, but his latter scores were far from flattering. Sehwag cannot afford to repeat the same mistake again, considering time is running out for him.

When a batsman has been out of form for an elongated period of time, his hunger gets tested when he finally gets that good score. And now that Sehwag has crossed that long waiting period, it remains to be seen whether he is willing to make up for lost time or is just satisfied with getting back among the runs. If he indeed desires to be remembered as a top-notch batsman, Sehwag will need to deliver consistently for the rest of career. And the effort for the same will have to begin in right earnest.

Talent alone cannot take a batsman far, and Sehwag must have understood this fact very well during the extended lean period he’s had in international cricket over the last couple of years. Even a guy like Vinod Kambli had humungous talent, but failed despite numerous opportunities provided to him. On the other hand, a player like Mike Hussey possesses limited ability, yet he has made the most of his gifts. What’s more, he is the perfect example of a player making up for lost time. Entering international cricket at the age of 30, the Aussie carved out one of the most successful careers in international cricket.

Sehwag’s problems in recent times have had more to do with his attitude than ability. Even if one takes into consideration that his latest hundred was scored on a benign pitch, the fact of the matter remains that the dominator exercised a certain amount of restraint during his innings. Sehwag knows best what ails him. Only he can correct that. The good news is that he has made a positive start.