The Feroz Shah Kotla surface will once again be the focus when hosts Delhi take on Punjab in the second match on Saturday. Delhi

The Feroz Shah Kotla surface will once again be the focus when hosts Delhi take on Punjab in the second match on Saturday. Delhi is perhaps the only side in Indian T20 Cricket who have struggled to capitalize on the home advantage as the pitch in Delhi has just not their suited their stroke-makers. This weakness of Delhi is exactly what Punjab will be trying to capitalize on.

Punjab, who overcame Rajasthan for a second time, and this time, without any controversy, in their previous match have the spinners who can exploit the conditions. There is skipper Ravichandran Ashwin himself apart from Mujeeb ur Rahman and Murugan Ashwin. Even in the pace department, they have the experienced Mohammed Shami and young Arshdeep Singh, who impressed in the previous game.

Punjab would be pleased with the way their batting is shaping up. While earlier, it seemed like a Chris Gayle-dominated batting outfit, Lokesh Rahul, Mayank Agarwal, and David Miller have all made their presence felt of late. Rahul has been particularly impressed with his consistency and quick pace of scoring. In both the departments, Punjab seem to hold an advantage over Delhi.

For the hosts, their batsmen clearly need to get out of the mindset of the pitch. It is clear that the nature of the surface isn't going to change. But obviously, the likes of Prithvi Shaw, Shikhar Dhawan, Shreyas Iyer, and Rishabh Pant. Each of them has played international cricket for the country, so it's really surprising to see them unable to adapt. 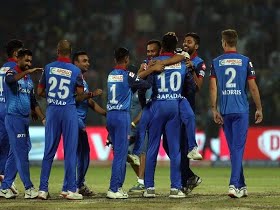 In the previous game, Delhi made the surprising move of playing Keemo Paul over Sandeep Lamichhane on a turning wicket. They went in with two spinners in Amit Mishra and Axar Patel, which could have cost them few crucial runs. Their bowling will need to find better teeth overall.