The 14th game of Indian T20 League 2019 will see a contest of equals but of a different kind. Both Rajasthan and Bangalore head

The 14th game of Indian T20 League 2019 will see a contest of equals but of a different kind. Both Rajasthan and Bangalore head into the game with three back-to-back defeats. But, following the contest at the Sawai Mansingh Stadium, Jaipur, at least one team will have points on the board.

Rajasthan began Indian T20 League 2019 by becoming the victim of a 'mankading' controversy against Punjab, and haven't seemed to have recovered fully from the jolt. Bangalore , on the other hand, have also had their share of controversies with the no-ball incident against Mumbai, but overall they just haven't looked in any sort of form in the remaining two games.

For Rajasthan, it has been a case of missed opportunities. Against Punjab, they fumbled after Jos Buttler's exit. And then they allowed Chennai to recover from 27 for 3 courtesy an MS Dhoni special. 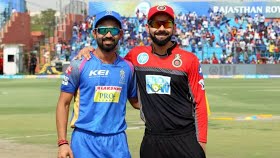 While Rajasthan's batting has been decent with Sanju Samson getting a hundred and Ajinkya Rahane, Buttler and Ben Stokes all getting among the runs, their bowling is a major worry. Jaydev Unadkat, in particular, has failed to deliver the goods despite being picked up a massive price for the second year in a row.

Bangalore are facing even bigger troubles. In the first match, they were folded up for 71 and against Hyderabad they crumbled to 113 all out after conceding 231 with the ball as David Warner and Jonny Bairstow blasted hundreds.

Bangalore will seek inspiration from skipper Virat Kohli and AB de Villiers as they try to resurrect their fortunes. In Parthiv Patel, Moeen Ali and Shimron Hetmyer, they have decent back-up batting talent.