When the Indian team takes the field for the first Test against New Zealand at Hyderabad on Thursday, there will be a sense of hollowness among the fans. After all, this will be the first match India will be playing following the retirement of Rahul Dravid and VVS Laxman.

When the Indian team takes the field for the first Test against New Zealand at Hyderabad on Thursday, there will be a sense of hollowness among the fans. After all, this will be the first match India will be playing following the retirement of Rahul Dravid and VVS Laxman. Their loss will definitely be felt by spectators as well as the team. At the same time, the Test will mark the beginning of a transition phase in Indian cricket, one in which they have to leave the glorious past behind and look forward to a new beginning, one in which the youngsters in the present squad will have a crucial role to play.

India have had a torrid time in Tests lately, having been pummelled by England and Australia away from home, in spite of having their experienced players in the squad. Now is the time to blood the youngsters, and have a look at the future. A good series against a New Zealand, which itself is struggling, will give the upcoming guys some confidence. And they will need all of that since tougher challenges against England, Australia and South Africa follow. They will have to make the best use of the opportunities on offer. 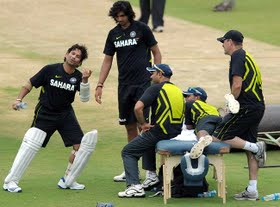 As for the team composition, Pujara and Kohli should come in as automatic replacements for Dravid and Laxman. The former will be playing his first Test in more than a year so will be keen to leave a stamp on the series. The runs he got in West Indies on the ‘A’ tour must have given him a boost for sure. Kohli, on the other hand, just has to continue doing what he has done so well in last few months. Of course, with only Sachin Tendulkar from the old guard remaining in the middle order, the team will look up to him to shoulder additional responsibility, which will test his temperament for sure.

There will be a tough contest for the number six spot between Suresh Raina and S. Badrinath. Being the original choice in the team, the left-hander might get the nod, but M S Dhoni has the ability to come up with off-beat selections depending on the situation, so the door might not be completely shut for Badrinath. In the bowling, India would be hoping Zaheer Khan gets good support from Ishant Sharma, who is yet to prove his match-fitness post injury, and Umesh Yadav. R. Ashwin and Pragyan Ojha will be keen to resume from where they left off against West Indies last season.

New Zealand, without Daniel Vettori, have been weakened even further. Also, they are coming from a confidence-shattering tour of the Caribbean. Brendon McCullum and skipper Ross Taylor are the only experienced guys in the batting line-up while the bowling attack has Chris Martin as the sole proven performer. These, and the home conditions, give India an edge, but the hosts are most vulnerable at the start of a series, and the Kiwis would look to catch them off-guard.