India captain Shikhar Dhawan praised his team for not losing self-belief and putting up an amazing performance in the second one-dayer against West Indies in Trinidad. Chasing 312, India were three down for 79. However, Shreyas Iyer (63) and Sanju Samson (54) gave India hope with a 99-run stand for the fourth wicket. Axar Patel then came in and smashed an unbeaten 64 off 35 as India won the game with two balls to spare and clinch the series. The left-hander struck five sixes in his innings, the last of which took India past the target.

Speaking after yet another close win, Dhawan praised the team and said at the post-match conference, “It was a great team performance. Boys didn't lose self belief, that is amazing. Iyer, Sanju, Axar everyone was amazing. Even Avesh came out in his debut game and scored those important runs.”

“We started a little slow. Shubman batted well. The Iyer-Samson partnership made a huge difference. There was a run-out. But these things happen,” Dhawan added. 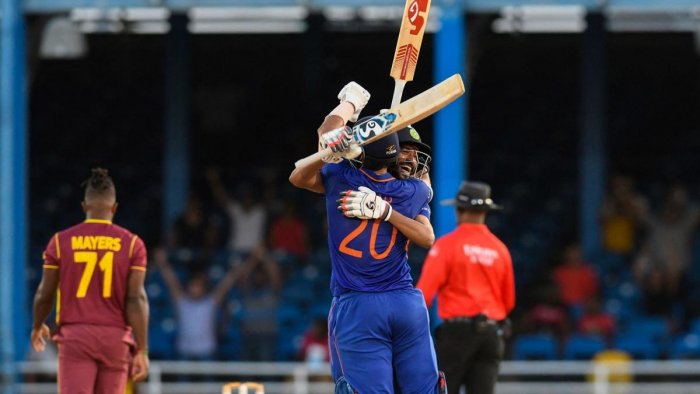 Crediting the Indian Premier League (IPL), Dhawan added, “Thanks to IPL, they perform on a huge stage.” Bowling wise, India had a tough game. Leg-spinner Yuzvendra Chahal went for 69 in his nine overs while debutant Avesh Khan was clubbed for 54 in his six. And, while Shardul Thakur claimed three wickets, he went for 54 in seven overs.

Asked about the Indian bowling effort, the 36-year-old said, “I felt that we bowled nicely. They got off to a good start. (Shai) Hope and (Nicholas) Pooran batted well. We thought if they could do it, we knew that we could do it.”

Concluding his thoughts on the match, the Indian captain said, “Boys are learning. Thanks to the support staff as well. They have been doing a tremendous job. It was a great feeling when I scored a 100 in my 100th ODI game. I would want to congratulate Hope for doing the same.”

The third and final match, which will be a dead rubber, will also be played at the Queen's Park Oval, Port of Spain in Trinidad on Wednesday, July 27.