Indian skipper Virat Kohli has stated he is willing to bat lower down the order to accommodate in-form openers Rohit Sharma, Shikhar Dhawan, and KL Rahul in the team

Indian skipper Virat Kohli has stated he is willing to bat lower down the order to accommodate in-form openers Rohit Sharma, Shikhar Dhawan, and KL Rahul in the team. While Rohit and Dhawan have formed an impressive pairing in one-dayers over the last six years, Rahul has also made it count whenever he has got his chances.

India and Australia will kick-off the one-day series with the first match at Wankhede Stadium in Mumbai on Tuesday. And, one of the questions on most Indian fans’ minds is who will partner Rohit at the top -- Dhawan or Rahul?

Kohli, however, has given a completely different twist to the story with his opinion on the issue. “Look, a guy in form is always good for the team. You obviously want to have the best players available and then choose from what the combination should be for the team. There might be a possibility that all three (Rohit, Shikhar, and Rahul) might play. It will be interesting to see what balance we want to take in on the field,” Kohli said, speaking ahead of the first ODI at Wankhede Stadium. 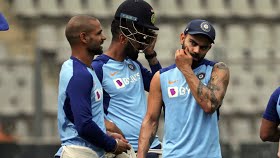 He candidly admitted that he has no problem altering his batting position if the situation demands so. “Yeah, big possibility. I would be very happy to do so. Look I am not possessive about where I play. I am not insecure about where I bat,” added Kohli.

Both Dhawan and Rahul have done well in limited-overs matches recently. While Dhawan has returned from injury, Rahul got his chances owing to Dhawan’s absence and, later, with Rohit being rested for the Sri Lanka T20Is.

Kohli added that he is also looking to ready the next lot of players so that the person who takes on the baton from him has a solid base.

“Being the captain of the team, it is my job to make sure that the next lot is also ready. A lot of the other people might not look at it that way, but your job as a captain is not only to look after the team right now but also to prepare a team that you leave behind when you eventually pass it onto someone else,” Kohli explained while speaking to the media.

He also responded to Aussie skipper Tim Paine’s query over India playing Day/Night Tests in Australia, saying his team is ready. “We’re ready and up for the challenge – whether it’s Gabba, Perth, it doesn’t matter to us. It’s become a very exciting feature of any Test series and we’re open to playing day-night Tests,” the Indian captain asserted.

India played their maiden day/night Test against Bangladesh last year at Eden Gardens in Kolkata and won with ease.