Chennai will be keen to return to winning ways when they take on Punjab in match number 18 of the Indian T20 Cricket League on Saturday at Chepauk. While Chennai won three in a row, they faltered against Mumbai Indians, the one team that has constantly troubled them over the years.

Punjab, on the other hand, despite the controversies they have been involved in, have managed to emerge victorious in three out of four games. But, they lucky against Delhi as a hat-trick from Sam Curran rescued them, else they seemed headed for a definite defeat. 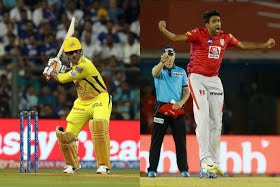 Chennai's bowling completely came apart against Hardik Pandya in the previous match. Dwayne Bravo, usually reliable, has not been able to reproduce the consistency. The move to bring in Mohit Sharma also did not work against MuM. As such, CHE would look to bring back either Harbhajan Singh or Mitchell Santner as Chepauk is known to aid spinners.

In the bowling, Kedar Jadhav was the lone star in the last match with a half-century. Chennai are power-heavy in batting so they would want the likes of Suresh Raina, Shane Watson, Dhoni, Ambati Rayudu and Dwayne Bravo to fire.

If you look at Punjab, Chris Gayle missed the last game as he was not fully fit. Ravichandran Ashwin would hope he is available for the game considering the form he is in. The manner in which Hardik dismantled Chennai, Gayle would be confident of doing something similar. David Miller is another form batsman.

In the bowling department, Mohammed Shami, Hardus Viljoen, Aswhin and Andrew Tye haven't been running through opponents yet they have been effective as a bunch. It remains to be seen whether they bring back Varun Chakravarthy, who was dropped after a couple of games.