The big fight: Miandad calls Afridi fixer, he hits back

Controversy and Pakistan cricket go hand in hand. The latest one involves a verbal war between the legendary Javed Miandad and the eccentric Shahid Afridi. Miandad had earlier stated that Afridi was motivated by money,

Controversy and Pakistan cricket go hand in hand. The latest one involves a verbal war between the legendary Javed Miandad and the eccentric Shahid Afridi. Miandad had earlier stated that Afridi was motivated by money, and that's why he was so keen to play his final international game for Pakistan. But, his latest allegations against the former Pakistan captain are even more shocking. Miandad has openly accused Afridi of match fixing, allegations that clearly haven't gone down well with the latter. According to reports, Afridi is all set to send a legal notice to Miandad.

After Miandad accused Afridi of playing for money, Afridi hit back at one of the heroes of Pakistan's victorious 1992 World Cup campaign. At a press conference, when asked about Miandad's comments, of Afridi being inspired by money to play his last game, the veteran all-rounder retaliated, "Money has always been an issue with Javed Miandad. That's the difference between him and Imran Khan." Afridi was quoted as saying so by Geo TV. To this, Miandad was quick to respond, and went to the extent of calling Afridi a match-fixer.

"I tell Afridi to swear upon his children and say he has not thrown away Pakistan's matches. I am a witness, I caught him myself," Miandad was quoted as saying by another Geo TV report. Not one to take things lightly, Afridi expressed his displeasure through Twitter. Javed Miandad is legend of cricket but he used very harsh words on TV for long time. He made personal attack on me for no reason, Afridi said in one tweet. I tolerated for long time but every person has a limit, sad that Javed Miandad was making personal attacks for long time, he added further. 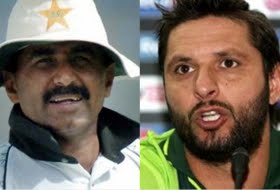 Justifying his outburst, Afridi further wrote, I regret what I said to a senior but of course I had to eventually react to his behaviour. Further, it is also being reported that Afridi is going to send a legal notice to Miandad over the match-fixing allegations. It may be recalled that Miandad had recently hit out at BCCI president Anurag Thakur over strained India-Pakistan relations.

Miandad is known as one of the greatest players ever in the history of the game, having played in every World Cup from 1975 to 1992. Afridi, on the other hand, has featured in 398 ODIs and 98 T20Is. He was the star performer during Pakistan's World Cup winning campaign in 2009.