This was expected, but not in as domineering a manner as things have panned out. In spite of India’s inability to overcome the Englishmen at home, India was very much anticipated that India would have it much easier against the Aussies, considering their inexperience in Indian conditions...

This was expected, but not in as domineering a manner as things have panned out. In spite of India’s inability to overcome the Englishmen at home, India was very much anticipated that India would have it much easier against the Aussies, considering their inexperience in Indian conditions, and more so since the pitches were expected to turn massively. Even so, as Australian skipper Michael Clarke aptly put it, the performance of his batsmen or the complete lack of it was ‘unacceptable’. He had a fair point; in spite of all the talk over spinning pitches, Australia managed to get the first use of the surface in both Tests. This basically translates to the fact that they got to bat when the conditions were most suitable for batsmen.

The simple fact was that the Aussie batsmen weren’t good enough to conquer the conditions, and it did not help that most of them hadn’t had a taste of Indian pitches before. The manner of the dismissals of David Warner and Phillip Hughes late on day three at Hyderabad, bowled around their legs while going for the sweep, demonstrated how desperate the Aussies had become to overcome the Indian spinners. Warner’s attacking tactics worked for a while as he got some quick runs off R. Ashwin, but his approach was bound to prove calamitous, as it did.

Having fallen way behind in the game after their capitulation on the opening day, the need for the Aussies was to put their heads down and spend as much time at the crease as possible. Instead, the two wickets that fell late on day three gave India just the kind of start they needed to push an already struggling Australia even further on the back foot. It was still surprising that Clarke and his men folded up so easily early on the fourth day, wickets falling as if the Aussies were not just interested in applying themselves. 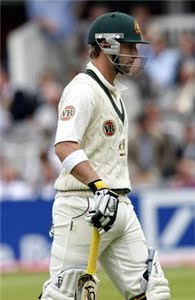 While the Australian batsman can be criticised over the lack of fight they put up, the harsh truth is that the just haven’t shown the technique needed to deal with the conditions India have offered them. Of the current lot, only Michael Clarke has tasted success in India before, and it has been no surprise that he has once again been their best batsman. Moises Henriques showed at Chennai that with the desired application one can score runs in these conditions even without having experience of the same. Some more experienced men have flummoxed. Shane Watson, of whom so much was expected as a batsman, has been out of sorts, Warner has failed to convert his starts and ditto with the less experienced Ed Cowan. For Hughes, this has been a horror tour, not knowing how to score a run.

Clarke admitted following the Hyderabad embarrassment that he would bat up the order in the next two Tests. And while that will certainly help the team’s cause, the move wouldn’t be of much use unless he find some support from his mates. Surely, Aussies will try their level best to make a comeback, and while their dedication is unquestionable, the bigger question is whether they can discover the technique and mental make-up needed to deal with the challenges over the next week.