Afghanistan captain Rashid Khan continued his impressive performance in the Chattogram Test against Bangladesh. The latter folded up for 173

Afghanistan captain Rashid Khan continued his impressive performance in the Chattogram Test against Bangladesh. The latter folded up for 173 as Afghanistan won the Test by 224 runs, Rashid finishing the second innings with figures of 6 for 49.

The victory is Afghanistan’s second in their first three Tests, no other Test side has achieved the feat. The triumph also made Rashid Khan the youngest captain to achieve a Test win.

The victory was all the more special as Afghanistan managed to give a fond farewell to veteran Mohammad Nabi, who announced his retirement from Test cricket. In fact, after winning the man of the match trophy, Rashid Khan dedicated his award to Nabi. 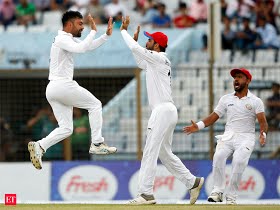 “The legend Nabi, who has played his last Test, has helped me and other young spinners a lot. I wish him all the best and I want to dedicate my Player-of-the-Match award to him," Rashid Khan was quoted as saying in an ICC report.

Taking to Twitter, an emotional Nabi wrote he couldn't have asked for a better farewell. "Cant ask for more, a fitting end to my #test career, taking the oportunity would like to thank @ACBofficials for being a wonderful organization and its support throughout my career,team #Bluetigers,captain @rashidkhan_19 and not to forget the support and services of Asghar Afghan," his tweet read.

Meanwhile, Rashid Khan praised his teammates as well as his coaching staff for the memorable victory against Bangladesh, saying it was a complete team effort.

“The credit goes to the players, supporting staff. The camp we had in Abu Dhabi was in the hottest weather I have ever been and then you come here; compared to that, it looked easier out here.

“It was a total team effort. The youngsters are learning very quickly, and especially we have a good four-day structure at home. That's the best thing done by the cricket board," Rashid Khan went on to add in the ICC report.