The perfect farewell for the legend named Sachin Tendulkar

Not all great cricketers are lucky to retire on a high. Just last year, Rahul Dravid and VVS Laxman had to quit after the disastrous 4-0 drubbing in Australia.

Not all great cricketers are lucky to retire on a high. Just last year, Rahul Dravid and VVS Laxman had to quit after the disastrous 4-0 drubbing in Australia. But, things were thankfully different as Sachin Ramesh Tendulkar said goodbye. Of course, it helped that the series was played at home against a weak West Indian side, which was only too willing to surrender under pressure. But, a win in your last Test is special nonetheless. And, for Tendulkar to have done the same at his home ground, in the presence of his family and friends, was extra special. 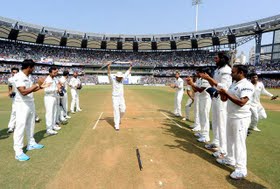 Many may have felt that a 100 in his last Test would have been the perfect way for Tendulkar to sign off. But, for a man who hasn’t scored a Test century in well over two years, it would have been too much to expect of the 40-year-old veteran. What he did come up with though was special in itself. The 74 that Tendulkar struck during the course of the Test was an incredible knock considering he had been out of form for so long in Test cricket. The innings was the triumph of mind over matter.

Tendulkar did a very smart thing by opting to play the Ranji Trophy match against Haryana prior to his farewell international series against the West Indies. And, the fact that he helped Mumbai win the game under tough circumstances meant that he was well prepared for the final fling in Test cricket. Chasing a challenging target on a tough pitch, the match could have gone either way, but Tendulkar brought all his experience into play and guided Mumbai past the finish line. It was the perfect end to his first-class career, in hindsight an indication of what was to follow.

The little master looked good during his brief stay at Eden Gardens as well in the first Test, but got a shocker of a decision which cut short his stay at the crease. Had the lbw decision gone in his way, who knows what magic he might have been able to work in that Test as well? The umpire who gave that decision, Nigel Llong, faced severe backlash from Tendulkar fans following the decision, but Tendulkar, as he has always done throughout his career, did well to keep his emotions in check, in spite of the big occasion.

And then, it all came down to Mumbai – the Wankhede Stadium. The venue where he had seen it all – from the highs of Ranji Trophy victories to the ultimate low of being booed in front of his home crowd and eventually winning the 2011 World Cup trophy. It was here that Tendulkar stepped on to the cricket field for one last time. When he bowled a few overs, the crowd roared, when he hit crisp boundaries they went berserk, and when he was eventually dismissed they all went silent in unison. As he had done for a majority of his career, even in his last innings, Tendulkar kept the crowd completely hooked.