Marcus Stoinis has been among the few bright spots for Australia in the series.

Marcus Stoinis has been among the few bright spots for Australia in the series. The Aussie has been decent with the ball, and has fought hard with the bat in hand. He has admitted that he is enjoying the challenge of pressure. 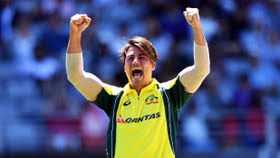 Stoinis, who had smashed an unbeaten 146 against New Zealand in a losing cause, played another good innings in vain at Kolkataz batting with the tail.

"I'm still quite new to those sort of situations [batting with the tail] because I am used to batting higher in state cricket. But really, the only plan is to try and win the game. That's the way I am going about. I am not trying to win a game from the start, but trying to be there till the end, trying to take the game as deep as possible and trying to communicate with my partner and just keeping it really as simple as that," Stoinis added.