IPL 8 29th T20: The clash between Royals ended in no result

IPL 8 29th T20 RCB vs RR match report: Rain ruined the clash between Royal Challengers Bangalore and Rajasthan Royals in Chinnaswamy Stadium, Bengaluru, as what could have been a fascinating game of cricket.

Rain ruined the clash between Royal Challengers Bangalore and Rajasthan Royals in Chinnaswamy Stadium, Bengaluru, as what could have been a fascinating game of cricket. 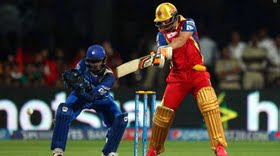 Had rain came half an hour earlier, we couldn’t have watched the 17 years old boy show. Rajasthan Royals skipper Shane Watson won the toss and elected to field first. It was the perfect start for the Rajasthan Royal as the in-form opener Chris Gayle(10) departed in the very first over Southee. In his next over, Tim Southee shown the way to the RCB skipper Virat Kohli as he poked a ball outside off stumps to the wicketkeeper Sanju Samson. AB De Villiers(57) and Mandeep Singh(27) added a good partnership of 74 runs together and helped Bangalore to get away from the two early blow.

De Villiers came hard at all the bowlers, especially on the veteran spinner Pravin Tambe. He dealt in boundaries most of the times. This partnership was broken by Stuart Binny when he trapped Mandeep Singh in front of stumps. In spite of losing his partner, De Villiers kept playing his shots, he struck nine fours and a six in his inning of 57. A little bit of mix up with Dinesh Karthik, found De Villiers short of his crease.

This was a big moment in the game for the both teams. After his departure, 17 years old , Sarfaraz Khan came in at No. 6. The moment he walked in, he started playing his shots fearlessly. He struck boundaries to most of the bowlers. It seemed at one point that he was kidding with Watson’s bowling. Sarfaraz(45) hit six fours and a six in his 21 ball inning. The shots he played were all eye catching. He added 28 runs with Dinesh Karthik and then 32 runs with David Wiese later.

Two good hands were played today one by AB De Villiers and the other by Sarfaraz Khan. But the inning played by Sarfaraz faded the De Villiers inning. We can say that no one expected such inning from a 17 years old lad in such situation and in front of packed stadium, so his inning was termed as superior than that of AB.

It was very unfortunate that rain interrupted the play just after first inning completed. Rain did stopped for some time and super sober were in use to remove the waters from the ground. But rain again arrived and full stop on all the hopes of game getting restarted. Umpires decided to call the match abandon due to rain.

Royal Challengers Bangalore and Rajasthan Royals shared one point each between them. It was the second consecutive rain wash game for the RR. With this one point, RCB has now seven points and they moved on the third spot and RR are still at second spot on the points table.