How other Indian legends fared in their farewell Test…

Sachin Tendulkar will bid a fond farewell to the sport he has loved and excelled in over the last two decades, having made a wonderful 74 in the first innings of his final Test, against the West Indies at the Wankhede Stadium.

Sachin Tendulkar will bid a fond farewell to the sport he has loved and excelled in over the last two decades, having made a wonderful 74 in the first innings of his final Test, against the West Indies at the Wankhede Stadium. Here, we look at how some other great names in Indian cricket performed in their final Test outing. 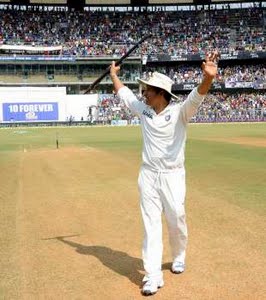 Sunil Gavaskar: Another Little Master from Mumbai, Sunny played his last Test against arch-rivals Pakistan on a minefield of a pitch at the Chinnaswamy Stadium in Bangalore in March 1987. In an extremely low-scoring game in which the ball was turning square, India were chasing 221 to win in the fourth innings. All other Indian batsmen struggled during the innings, and it was only Gavaskar, who looked in complete control. His 96 from 264 balls was among the finest knocks anyone has ever played in their last Test innings. Unfortunately, Gavaskar’s heroics couldn’t win the game for India. He was dismissed with the score at 180 for 8, and India went on to lose the Test by 16 runs.

Kapil Dev: The Haryana Hurricane extended his career for a few years to break Richard Hadlee’s record for most Test wickets. He retired immediately after crossing the mark. He played his last Test at Trust Bank Park at Hamilton in March 1994. In New Zealand’s first innings, Kapil ended with figures of 1 for 29 after 9 overs. He dismissed Blair Hartland caught by Rajesh Chauhan for a duck. With the bat, he scored 18 from 44 balls with the aid of one six before being caught by Fleming off Nash’s bowling. In Kiwis’ second innings, he ended with figures of 1 for 43 from 16 overs. Parore caught by Mongia for 17 turned out to be his last Test victim.

Rahul Dravid: After a wonderful tour of England, Dravid went to Australia on a high, but had a poor time, and ended up playing his last Test at Adelaide in January 2012. Dravid was bowled by Ben Hilfenhaus for 1 in India’s first innings, and made 25 from 71 balls in India’s 2nd innings before he was dismissed by Ryan Harris caught by Mike Hussey for 25. India went on to lose the Test by 298 runs. Dravid announced his retirement after a while.

VVS Laxman: The gentle giant from Hyderabad played his last Test at Adelaide in January 2012 – the same Test which was Dravid’s final match in international cricket. Laxman, who had a terrible tour, made 18 before being caught by Haddin off Lyon in the first innings. In the second innings, he scored 35 off 88 balls with the help of four boundaries before being caught by Shaun Marsh off Lyon’s bowling.

Anil Kumble: An injured Kumble announced his retirement midway through the 2008 Test against Australia at Kolkata in November 2008. He made a fluent 45 with the bat in India’s first innings. With the ball, he grabbed 3 for 112 from 43.3 overs. His wickets were those of Haddin, Lee and Johnson. He bowled four overs for 14 runs without picking up a wicket in Australia’s second innings as the match ended in a high- scoring draw.