2nd Test: Root lead the fight back but Pakistan still on top

PAK vs ENG 2nd Test Day 2: The opening day of the second Test at Dubai was resembling the first Test match at Abu Dhabi, but the first session on the second day here produced some quick wickets which opened up the game nicely.

The opening day of the second Test at Dubai was resembling the first Test match at Abu Dhabi, but the first session on the second day here produced some quick wickets which opened up the game nicely. Misbah-ul-Haq was dismissed without adding any run to his overnight score. The wicket of Misbah opened up the gate for the visitors and Pakistan lost their last six wickets for just 96 runs. Both Mark Wood and Moeen Ali picked up two wickets on day 2 to restrict Pakistan on 378. For England, Alastair Cook and Joe Root have scored half-centuries but they are still 196 runs away and have lost three important wickets. So, the game seems to be nicely poised to be a good contest. 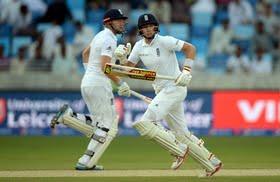 Alastair Cook carried his inning from where he had left in Abu Dhabi and continued to dominate Pakistani bowlers. He scored 65 runs and added 113 runs for the third wicket with Joe Root. Root joined Cook when England were reduced to 14 for 2 and Root is still unbeaten on 76. In the final session, though, the leg-spinner Yasir Shah, much-hyped but missing from the first Test because of injury, claimed the most valuable wicket of Cook for 65, taken at leg slip. Whether England, 182 for three and still 196 behind in the first innings, can get back into this match will now depend on how the middle and late order can cope with the bowling. There is already a little zip from the pitch for Yasir and the left-arm spinner Zulfiqar Babar, as well as some reverse swing for the pacemen, led by Wahab Riaz, who once more got his pace up to 90 miles per hour and beyond. Though England have some batting left down the order, but they would like to get some more runs from Joe Root. They can’t trust their middle order and newer batsmen to score on low and slow track. It was the worst of starts to the England innings which began immediately after the extended lunch interval. Moeen Ali may count himself unfortunate in the same way as might Shoaib Malik in the Pakistan innings, in that he played a ball from Wahab square of the wicket from the middle of the bat, only to be caught at short leg. But Ian Bell had no such excuse. Here we have a batsman struggling for his career now, each innings a trial in itself. Such were the nature of the two catches he dropped in the first Test that there were suggestions being made that his eyesight had become less sharp.