BAN vs IND 2nd ODI Preview, Live Scores: Even though Bangladesh are no longer minnows in one-day cricket, India did go into the series against Bangladesh as favourites of sorts.

Even though Bangladesh are no longer minnows in one-day cricket, India did go into the series against Bangladesh as favourites of sorts. After all, India are the World Cup semi-finalists, and even defeated Bangladesh in the quarter-final of that tournament, albeit in a somewhat controversial fashion. But, it has taken only one game to change the perception of India being favourites. Following three comprehensive wins against Pakistan, the hosts continued their exciting form against India as well, coming up with an extremely dominant performance to take the early lead. With this being only a three-match series, a win on Sunday will give Bangladesh their second historic one-day series win in a row. 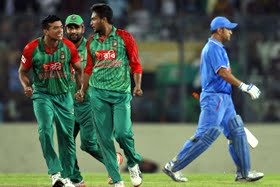 There were plenty of memorable performances from players from the Bangladesh side in the opening ODI, none better than that of left-arm seamer Mustafizur Rahman, who claimed five wickets on debut, and destroyed the Indian batting. India were caught completely unawares by Bangladesh's latest fast bowling talent as they succumbed to his pace and movement. While Mustafizur was undoubtedly the top performer for the team in the first match, the hosts would also be extremely pleased with the way Taskin Ahmed bowled. It was he who put India on the back foot after the openers had given them an impressive start.

Bangladesh's batting on the day was also highly competent. The openers Tamim Iqbal and Soumya Sarkar gave them a smashing start, and the Indian bowlers looked completely ineffective against the duo. Bangladesh would have liked them to carry on, but even after they lost their way, they came back very well courtesy their middle and lower order. Shakib Al Hasan began the fight back for the hosts with a quick half-century. He was very well supported by Sabbir Rahman, and later, Nasir Hossain also joined in the action. The trio ensured that Bangladesh finished with a flourish, and crossed 300.

Although India conceded a few too many towards the end, 300 is a par score in an ODI these days, and India, with their experience, should have chased down the same. However, they were not prepared for the challenge, at least not the one offered by Mustafizur, as the visitors surrendered meekly. Shikhar Dhawan and Rohit Sharma got the side off to a very good start, but they have only themselves to blame after the openers took the score closer to 100. Dhawan played a poor shot to get out after being set, and Virat Kohli's early dismissal meant another single-figure score for him. Rohit did cross fifty, but not for the first time, gifted his wicket away.

The entire Indian chase seemed like an exercise in futility. Suresh Raina and Ravindra Jadeja got starts, but their cameos were not good enough to take India anywhere closer to victory. Apart from their batting, India will also need to get their act right in the bowling. Ravichandran Ashwin was the only bowler to make some sort of an impact on the Bangladesh batsmen. As for the rest they are struggled, be it Bhuvneshwar Kumar or Mohit Sharma with their medium pace, or Umesh Yadav with his faster ones. India clearly have a massive task on hand as they look to save pride on Sunday.