New Zealand fought back to keep India down to 307 for 5 by Stumps on Day 1. India managed to pull off yet another good partnership in the day’s play with Pujara and MS Dhoni adding 47 runs for the unbroken 6th wicket.

Update at Stumps on Day 1: New Zealand fought back to keep India down to 307 for 5 by Stumps on Day 1. India managed to pull off yet another good partnership in the day’s play with Pujara and MS Dhoni adding 47 runs for the unbroken 6th wicket. The hosts were anchored to the good total thanks to Cheteshwar Pujara's maiden Test Century. Pujara is still unfinished and would be looking to convert the century into a big one to take India past 400 atleast on a pitch that has been slow and low.

The final session of the opening day's play at Hyderabad saw Chris Martin out of nowhere getting a short of length delivery to kick up to force Virat Kohli (58 from 107 balls with 8 fours) to edge a square drive to Guptill at second slip. Kohli got out in the 69th over having put up a lovely partnership of 125 with Pujara. 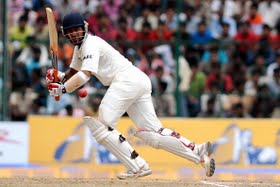 After Kohli’s exit, in came Suresh Raina, who was under pressure to prove his Test credentials. Unfortunately, the left hander lasted only 13 balls before he was unlucky to be given caught by the keeper down the legside off an innocuous delivery from Jeetan Patel. India was 260 for 5 in the 73rd over when Skipper MS Dhoni joined Pujara. The pair saw through the second new ball to have India end the first day’s play at 307 for 5. Pujara had a slice of luck towards the fag end of the day’s play when an indipper from Chris Martin took the bottom of his glove and was caught by the keeper but the Umpire ruled it not out.

Pujara remained unbeaten on 119* (from 226 balls with 15 fours and a six). Skipper MS Dhoni had his share of luck but somehow managed to survive with a score of 29* (from 37 balls with 2 fours and a six). Dhoni’s counterpart Ross Taylor had a poor day on the field as his team could only bowl 87 overs in six and a half hours. Taylor put down atleast three chances in the slips to let the Indian batsmen off the hook. In the course of the day, New Zealand had an injury worry as Doug Bracewell left the field midway through his 11th over with cramps in the hamstring region.

Update at Tea on Day 1: Young guns Cheteshwar Pujara and Virat Kohli through a solid partnership have taken India to 182 for 3 in 54 overs by Tea. Pujara has gone on to register his 2nd Test fifty, and is batting nicely on 54* (from 121 balls with 6 fours). Virat Kohli has shown good footwork to pick up 32* (from 64 balls with 4 fours).

India was under some pressure when Sachin Tendulkar got cleaned up by an inswinger from Trent Boult which reduced the hosts to 125 for 3 in the 35th over. Tendulkar (19 from 62 balls) went back rather than coming forward and brought his bat down pretty late to get cleaned up by the left-armer through the gate.

Update at Lunch on Day 1: It was a mixed bag for both the teams in the morning session with India losing two wickets but at the same time scoring 97 runs in 25 overs. At the time of lunch, no.3 Cheteshwar Pujara (12* from 32 balls) is at the crease with maestro Sachin Tendulkar (12* from 41 balls).

It was a decent start for the hosts until Gautam Gambhir (22 from 36 balls with 4 fours) tried to steer an away going delivery from left-armer Trent Boult to get a feather edge to the keeper with India at 49 for 1 in 10 overs. Virender Sehwag played a chancy knock which was filled with streaky edges and some well timed shots. Sehwag’s luck ran out when his square cut off Doug Bracewell flew off a thick edge to Martin Guptill at second slip to have India at 77 for 2 in 14.3 overs. Sehwag had by then scored 47 from 41 balls with 9 fours.

The pitch saw quite a lot of balls stay low already. There is not much of pace in the track as well and batting could get tougher as the game goes along.

Toss and Teams: MS Dhoni has won the toss and opted to bat first on a dry surface at Hyderabad in the First Test. Well MS Dhoni has mentioned that the players sitting on the bench are Rahane, Badrinath, Piyush Chawla and Ishant Sharma. So, Suresh Raina gets a game ahead of Badrinath and will bat at no.6 while Cheteshwar Pujara is likely to come in at no.3.

New Zealand are playing just the one spinner in Jeetan Patel as expected. James Franklin is their specialist all-rounder while there are three full-time pacers in Chris Martin, Doug Bracewell and left-armer Trent Boult.

Pitch Report: Sourav Ganguly who was doing the Pitch Report on Star Cricket has said that the surface is dry and there is a bit of moisture which should evaporate quickly because of the heat. The pitch at the Rajiv Gandhi International Stadium has quite a lot of dry patches which should crack up to make batting tougher as the game progresses. There is no grass at all on the pitch which seems to be tailor-made for the Indian Spinners.