Afghanistan went down fighting by 23 runs in their Group A match against India at the R Premadasa Stadium in Colombo. The underdogs were always in the contest until the end of the 17th when their best batsman Mohammad Nabi holed out to long off thanks to the clever R Ashwin.

Afghanistan went down fighting by 23 runs in their Group A match against India at the R Premadasa Stadium in Colombo. The underdogs were always in the contest chasing the target of 160 until the end of the 17th when their best batsman Mohammad Nabi holed out to long off thanks to the clever R Ashwin. The Afghans were bowled out eventually for 136 in 19.3 overs much to the relief of MS Dhoni.

The run chase of the Afghans got off to a promising start with Wicket Keeper Mohammad Shahzad playing his helicopter shots. In the 4th over, he got out dragging a wild pull off Balaji into the hands of mid off with his team at 26 for 1. Afghanistan got to 52 for 2 in 7.1 overs when its Skipper Nawroz Mangal (22 from 18 balls with a four and a six) was trapped lbw by an arm ball from Yuvraj Singh. 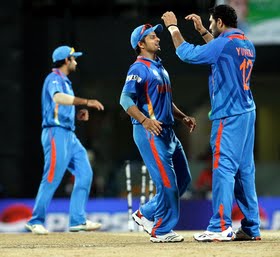 With his left arm spin mixed with the odd arm ball, Yuvraj got two more wickets, this time in consecutive deliveries that left the Afghans at 75 for 4 in the 12th over. R Ashwin complemented him by taking a return catch in the 13th over to have the chasing side at 76 for 5. India was still under pressure as Mohammad Nabi, who came in at no.5 smoked a couple of huge sixes and spanked a couple of boundaries to get his side back in the contest. But Nabi (31 from 17 balls) got out in the 17th over with Ashwin pausing in his delivery stride and forcing a miscued lofted shot.

L Balaji did the finishing work for India taking two wickets in the end and also affecting a run out. The real heroes though were Yuvraj Singh with 4-0-24-3 and R Ashwin with 4-0-20-2. Surprisingly the Man of the Match wasn’t given to either of them but for Virat Kohli, who scored a fifty in a tricky situation.

India Innings: India was extremely lucky to reach a competitive total of 159 for 5 in 20 overs against some superb bowling performance from minnows Afghanistan. The fielding from Afghanistan and a few bad deliveries resulted in India getting away from an otherwise ordinary batting display. Atleast three easy catches were put down by Afghanistan and one of them cost them a six as well. Virat Kohli was once again the star for India scoring 50 from 39 balls (with 4 fours and 2 sixes) under pressure.

It was tough for the Indian openers as they didn’t know what was coming up from the unknown Afghan bowlers. And what they got was aggressive fast bowling from the left-arm Shapoor Zadran and the slingy Dawlat Zardan. India had a casualty in the 3rd over when Gambhir played onto his stumps. Sehwag also fell cheaply when he was forced to edge behind a speedy delivery from left-armer Shapoor Zardan which reduced India to 22 for 2 in the 5th over.

India was under pressure when Yuvraj Singh walked in to join Virat Kohli, who looked very calm unlike the rattled openers. Yuvraj took the initiative and came up with a straight six and Kohli too played some great shots. In the 11th over, India lost Yuvraj Singh (18 from 20 balls) as he under edged a cut off spinner Kamran Sadiq to short thirdman. From 68 for 3, India reached 114 for 4 when Kohli got caught at long off. Kohli would have been dismissed earlier but for a dropped catch which helped him get to a fifty.

It was difficult for India to find the big shots even in the final overs as the bowling was pretty full in the blockhole. Amidst that, Suresh Raina scored a crucial 38 (from 33 balls with 6 fours) and Skipper MS Dhoni got a good last over to come up with a cameo of 18* (from 9 balls with 2 fours and a six). India breathed better with a total of 159 for 5. The bowling from Afghanistan was a mixed bag, at times it was too good and at times it was too wayward but the promise was there to be seen. India was helped by 16 extra runs as well to reach a decent total.

Toss and Teams: Afghanistan won the toss and elected to bowl first in the Group A Match against India at the R Premadasa Stadium in Colombo. The pitch is rock hard and should be a good surface to bat on. There will be the extra bounce to interest both the pacers and the spinners.

While there is little known about the new minnows Afghanistan, all that can be reported is that Harbhajan Singh misses out for India. The rest of the side is the same that lost against Pakistan in the warm-up match.