After being defeated rather comprehensively in the Tests and one-dayers by hosts England, Sri Lanka's confidence will be at a real low as they face the rampaging opponents in the only T20 at Southampton.

After being defeated rather comprehensively in the Tests and one-dayers by hosts England, Sri Lanka's confidence will be at a real low as they face the rampaging opponents in the only T20 at Southampton. Apart from the expected wins against Ireland, Sri Lanka have failed to taste victory in a single international match on tour. They were defeated 2-0 in the Tests, and but for rains, could have been whitewashed. They would have gone into the one-dayers believing they have a better chance of succeeding, but apart from a tie in the opening match, did not pose any challenge to the hosts. They would hope for better fortune in their final match at Southampton.

The format of T20 cricket, it's short nature to be precise, presents Sri Lanka with its best chance to taste a win in their final match on tour. A blazing cameo or a brilliant short spell can be enough to turn a match in T20s. But, the problem for Sri Lanka in this series has been that they haven't been able to put together even one effort in which their batsmen and bowlers have done well in tandem. The batsmen did a great job in the opening match, but the bowlers undid it. In the fourth match, again the batsmen were on a roll, but the bowlers could not defend a huge target. The situation was vice-versa in the final ODI as the batsmen could not chase a big target.

If Sri Lanka want to make a match of the only T20, they will need to find some star performers, who will put their hands up. Dinesh Chandimal has been the most consistent of all batsmen in the series so far. A good knock from him will make a bigger difference in the T20. Of course, he will have to improve his strike rate drastically. He was rather slow in the one-dayers. Sri Lankan captain Angelo Mathews has admitted that he is definitely under pressure as leader of a struggling side. But, he has also added that he won't be deserting the ship. Mathews will look to lead from the front, but will need support from the likes of Kusal Mendis, Upul Tharanga and, in particular, Farveez Maharoof.

England have been going from strength to strength during the course of the series, and will be keen for the positives to continue in the last match of the series as well. Skipper Eoin Morgan really hasn't had much to do in the series, as the top order has blossomed, but he is one of the most dangerous batsmen in the T20 format, and will be keen to make an impression. Jason Roy has been in scintillating form, and will be keen to continue in the same vein. In Alex Hales' absence James Vince has been doing well for the hosts at the top of the order. In further good news, Jos Buttler too has been in brilliant form. Jonny Bairstow needs to get back his rhythm though. 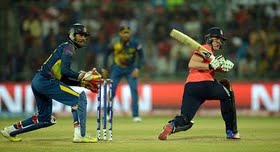 A lot of focus going into the T20 has been on Tymal Mills. The paceman, came into the reckoning after giving Chris Gayle a tough time during the NatWest T20 blast. Mills, who is said to possess some serious pace, is all set to make his debut, and will be hoping to impress. Even with no James Anderson or Stuart Broad, England have a reasonably good bowling line up. Liam Plunkett has made a good comeback into the team, using his experience. David Willey has been highly impressive, while Adil Rashid remains a good bet irrespective of the format. England will be raring to finish the series on a high.