Australia continued their domination on Day four of the Sydney Test, which meant that despite weather interruptions, there are in with a good enough chance of clinching the series 3-0

Australia continued their domination on Day four of the Sydney Test, which meant that despite weather interruptions, there are in with a good enough chance of clinching the series 3-0. Australia smashed 241 runs for the loss of two wickets in merely 32 overs to set up the game for the bowlers to take over. Here are some significant numbers from the penultimate day’s play.

Batting in their second innings, Australia rocketed away to 241 for 2 in 32 overs before declaring. The Aussies scored at a rollicking run rate of 7.53. This is the best by any team in an innings. Previously, West Indies raced away at a run rate of 6.82 when they made 173 against India at Kingston way back in 1982-83. Another incredible stat is that Australia's run rate in their second innings in this series has been an exceptional 6.23. 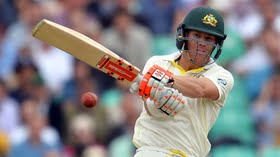 David Warner continued his excellent run in the match. Following his historic first innings hundred, he smashed a fifty off 23 balls. This is the fastest by an Australian in Test history. The previous best was Bruce Yardley (29 balls) against West Indies at Bridgetown in 1977-78. Specifically against Pakistan, the previous fastest by a batsman was by Kapil Dev, who needed 30 balls to reach his half-century in the Karachi of 1982-83.

Warner’s fifty is also the second fastest ever in Test history. The one who holds the record for the fastest is also part of this game, but in the opposition, and it is a surprising name. Pakistan skipper Misbah-ul-Haq, who is currently struggling for runs, needed only 21 balls to blast a half-century, against who else but the Aussies at Abu Dhabi in 2014-15.

Warner’s 55 from 27 balls was smashed at a strike rate of 203.70. This is the best by any batsman, who has made at least a half-century. The previous record was in the name of Chris Gayle. The West Indian swashbuckler hit an unbeaten 80 off 46 balls at a strike rate of 173.91 against New Zealand in Port-of-Spain in 2014. Warner overall strike rate in this match is 137.70.

The Sydney Test is only the fourth instance in Australia’s Test history when both batsmen have crossed fifty plus in both innings. While Warner and Matt Renshaw both hit hundreds in the first innings, Warner opened with Usman Khawaja in the second. And, this time both scored fifties. The openers alone scored a whopping 431 runs for Australia in this Test.

Yasir Shah's economy rate in the second innings was 8.85. This is the worst even by a bowler in the history of Test cricket, who has delivered at least 10 overs in an innings. Shahadat Hossain went at 8.41 at Lord's in 2005.

Batting at number four, Younis Khan made a memorable 175 not out. He missed out on becoming the third visiting batsman at that position to hit a double hundred at the SCG. Brian Lara made 277 at this venue, and Sachin Tendulkar's 241 not out. Younis’ score though is the highest by any Pakistan player at the SCG, overtaking Ijaz Ahmed's 137 in 1995-96, which was the last time Pakistan won a Test in Australia.