The last time India and West Indies met in the T20 format, the latter came up triumphant. It was a significant occasion as well – the semi-final of the World T20

The last time India and West Indies met in the T20 format, the latter came up triumphant. It was a significant occasion as well – the semi-final of the World T20. Being played in India, the hosts were overwhelming favourites to clinch the trophy. But, not only did West Indies topple India, they also went on to lay their hands on the World T20 trophy for the second time since its inception in 2007. As such, West Indies will go into the series against India beginning on Saturday as favourites, despite the fact that they were thrashed in the Test matches.

The match will be important for the future of cricket since it will be played in the relatively less explored environs of Lauderhill in Florida. West Indies have played here before, so that will give them an extended advantage. But, the matches here featuring the Windies, Sri Lanka and New Zealand were distinctly low-profile. India’s entry gives it a whole different twist, as the crowds would be expected to flock in. After all, there are Indians who love cricket in every part of the world. And, USA is no different. So, India will be under pressure to perform here as well. 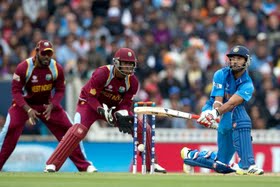 Coming back to the teams, West Indies begin a new era minus two-time WT20-winning skipper Darren Sammy, who has been dropped by the selectors owing to his poor form. The decision came as a bit of a shock, since Sammy had made a serious impression in the recently-concluded CPL. But, West Indies selectors felt otherwise. And so, the Windies will now be led by Carlos Brathwaite, who hit those four famous sixes to seal the WT20 win for West Indies against England in the final. Leading will be a massive challenge for Brathwaite since he is yet to establish himself in the team.

West Indies’ greatest strength remains that they have an excellent batting outfit, arguably the most dangerous in the world at present. Chris Gayle has not been featuring in Tests recently, but that hasn’t affected his T20 form much. He had a mixed WT20, but has since rollicked in the CPL. The Indian bowlers will have a challenging taming him. Marlon Samuels may have struggled in the Tests, but in T20s, he is a completely different proposition. In Kieron Pollard and Andre Russell, they have two of the biggest hitters of the cricket ball in the game. And, we haven’t even spoken of Lendl Simmons.

As for India, they will be led by MS Dhoni, who remains in the team as wicket-keeper batsman. With him no longer featuring in the Tests, he will be under greater pressure to keep his place in the team. India have a strong batting outfit in Shikhar Dhawan, Rohit Sharma and Virat Kohli in the top three, but they can still struggle when it comes to the big-hitting battle. KL Rahul and Ajinkya Rahane are also likely to play. In the bowling, a lot will depend on the duo of Jasprit Bumrah and Mohammed Shami apart from Test hero Ravichandran Ashwin.