Aussie David Warner is the new No.1 ODI batsman

Swashbuckling Australian batsman David Warner has become the world’s number one batsman in one-dayers for the first time. Warner scored his career best 179 in the fifth One-Day International against Pakistan in Adelaide

Swashbuckling Australian batsman David Warner has become the world’s number one batsman in one-dayers for the first time. Warner scored his career best 179 in the fifth One-Day International against Pakistan in Adelaide, and has reached the numero uno spot according to the latest International Cricket Council (ICC) rankings which were disclosed on Friday. The Australian opener beat AB de Villiers and Indian skipper Virat Kohli, to claim his spot at the top of the table. He enjoys a 19-point lead over South Africa ODI skipper de Villiers, with a tally of 880 points.

Warner blasted 179 from 128 balls in a record 284-run stand with Travis Head at Adelaide as Australia won the match 57 runs, and the series 4-1. Since January 2016, Warner has blasted 1755 runs in 28 matches with as many as nine centuries. "It is a huge year for one-day cricket with the ICC Champions Trophy later this year and I am hoping I can take my good form into that tournament and help Australia lift the trophy for the third time. It is always a great honour and very nice to receive these accolades but from my perspective my job is to put our team into winning positions and I have been fortunate that I have been able to do that lately,” Warner was quoted as saying by the ICC website. 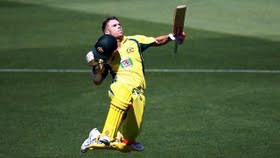 Head, who hit his maiden ton in the same game, rose to 38th position while Babar Azam, who also hit a hundred at Adelaide, entered the top 10. Among the bowlers, Mitchell Starc rose to second behind New Zealand's Trent Boult in the ICC ODI Rankings for bowlers. Josh Hazlewood, with his seven wickets, is up at number five. With another series list, Pakistan remain at No 8, and are in serious danger of failing to qualify directly for the ICC World Cup 2019.