Bangladesh defeated Pakistan by 7 wickets to register their first Twenty20 win against Pakistan at Dhaka, Bangladesh after 7 consecutive losses. The target of 141 runs was always in reach of the home team. They lost some early wicket but winning it with 20 balls to go, suggest that it was a comfortable victory for them. 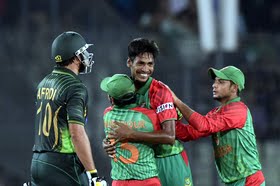 Chasing a score of 142, Tamim Iqbal(14) started off well with two boundaries and a six to Hafeez in the very first over but debutant Soumya Sarkar(0) without facing any ball, was nailed by direct throw of Ajmal in trying to snitch a quick single. Soon after that, Tamim also departed.

In form batsman Mushfiqur Rahim(19) came in and played some shot but was cleaned up by Wahab Riaz when he inside edged away going delivery on to his stumps.

Shakib(57) and Rehman(51) stood firm to ensure that the team didn’t lose the track now. In between, both batsman landed some meaty blow and added a match winning partnership of 105 runs. Rahman managed seven boundaries and a six in his fiery knock of 51.

As far as Pakistan’s bowling is concern, Umar Gul and Saeed Ajmal was once again ineffective and expensive. Ajmal has never looked the same bowler as he was before remodeling his action. Wahab Riaz took a wicket but was very expensive.

Earlier, Pakistan’s skippers Shahid Afridi won the toss and opted to bat. Bangladesh’s bowlers didn’t allow the openers Mukhtar Ahmed(37) and Ahmed Shehzad(17) to let go off a quick start as it took 53 balls to reach Pakistan’s 50. Ahmed Shehzad was clearly struggling at the crease and never settled in. His struggle came to an end when he lifted the ball in air and Mortaza completed a good running catch.

Shahid Afridi surprised us when he came on to bat at no. 3 but was very unlucky to be given out caught behind where replay showed clearly that there was no edge.

Soon after that, Mukhtar Ahmed was trapped by some clever bowling from Arafat Sunny as he saw Mukhtar coming out of his crease and bowled that outside leg, wicket keeper done the rest.

Haris Sohail(30) and Mohammad Hafeez(30) played some shot and managed to put a partnership of 49 run. But Bangladesh’s bowlers came back well in last few overs and restricted Pakistan to below par score of 141 runs only.

Pakistan is yet to win a game on this tour as Bangladesh had whitewashed the ODI series 3-0. Bangladesh is looking much improved side now and has been better side in match in all three departments. With return of Misbah-ul-Haq and Younis Khan in the test team, Pakistan would be hoping to change in their fortune with change in some faces.

Player of the Match: Sabbir Rahman