Will have to rethink me batting at four, concedes Kohli after Mumbai drubbing

Despite the 10-wicket whipping at the hands of Australia in the first ODI at Wankhede Stadium in Mumbai, Indian captain Virat Kohli feels that there is no need to panic

Despite the 10-wicket whipping at the hands of Australia in the first ODI at Wankhede Stadium in Mumbai, Indian captain Virat Kohli feels that there is no need to panic as it was just one bad game. However, he did concede that there might be a rethink of the batting order after the move to playing all three openers in the first ODI did not yield desired results.

India went in with Rohit Sharma, Shikhar Dhawan, and KL Rahul at Mumbai. However, while Dhawan and Rahul featured in a century stand after Rohit fell early, India’s middle and lower-order batting collapsed, as a result of which they were held to 255 all out. Kohli, who came in at number four, was dismissed for 16 from 14 balls as all the Aussie bowlers went for under six an over.

In response, Australian openers skipper Aaron Finch and David Warner slammed breezy hundreds as the visitors went 1-0 up following an emphatic 10-wicket triumph. Finch and Warner featured in a record stand of 258 -- the highest partnership against India. 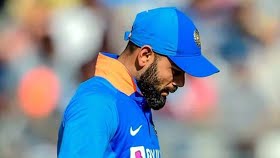 On Kohli coming in at number four to accommodate Rahul at three, the skipper admitted, “We've had this discussion many times in the past as well. Because of the way KL (Rahul) has been batting, we have tried to fit him in the batting line-up. But I don't think it's gone quite our way whenever I batted at four so probably will have to rethink that one."

However, he added that it is the long-term move that might prove beneficial for the team as it is giving in-form players more opportunities. "It's about giving some guys opportunities. Every now and then, it's about putting people up there and testing them. People need to relax and not panic with one game. I am allowed to experiment a little bit and fail at times. Today was one of the days it didn't come off," Kohli added.

While Dhawan and Rohit have formed a formidable pair at the top over the last few years, Rahul has grabbed the opportunities that have come his way whenever Dhawan or Rohit have been absent. He even hit a hundred in the ODIs against West Indies. On Tuesday against Australia, Dhawan scored 74 from 91 while Rahul contributed 47 from 61.

Despite being at the crease for a long time, they failed to accelerate, and their defensive approach set India back once the wickets started falling. In remains to be seen whether India go for a strategy change in the next game.

The second match of the three-game ODI series will be played in Rajkot on Friday, January 17. A defeat at Rajkot would hand India a second consecutive one-day series loss at home to Australia in less than a year.