An all too familiar India-Sri Lanka ODI

India-Sri Lanka matches, of late, have developed a rather familiar script. And, high-scoring games have often gone in India’s favour, whether they are batting first or not. Saturday’s game was no different.

India-Sri Lanka matches, of late, have developed a rather familiar script. And, high-scoring games have often gone in India’s favour, whether they are batting first or not. Saturday’s game was no different. Batting first, India notched up a massive score on board, courtesy yet another ton by Virat Kohli, and a confidence-boosting 96 by Virender Sehwag. Just to complete the familiar tale, Suresh Raina and M S Dhoni came in to play quickfire cameos and took the Indian score past 300. In reply, Sri Lanka were always playing catching up, and despite of a fighting ton from elegant left-hander Kumar Sangakkara as well as anotherblitzkrieg of a knock from all-rounder Thisara Perera, they still fell reasonably short of the target.

In recent games between the two teams as well, India have had the better of Lanka, with Kohli’s unbelievable knock at Hobart, during which he single-handedly took India to victory coming to mind. For the moment, it seems India have gained a slight advantage over their Asian opponents. However, it is indeed a negligible one, for majority of the contests between the teams in recent times have been close encounters. 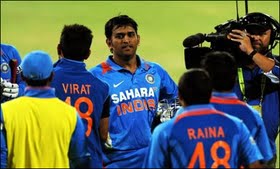 The game at Hambantota went India’s way despite a shabby fielding effort and some ragged bowling towards the end because they had put up a big enough score on the board. After India lost Gautam Gambhir early, Kohli and Sehwag featured in a wonderful partnership that put the Lankan bowlers on the back foot. As expected, Sehwag wasn’t at his best early on. In fact, he provided a number of opportunities to the Lankan fielders early on, but the hosts uncharacteristically let go of all of them. As for Sehwag, he deserves praise for not throwing his wicket away on this occasion, and almost getting to a hundred.

Speaking of Kohli, any praise is too less for him. He has delivered hundreds with amazing consistency in recent times. He got one mentioned above in Hobart, went one step ahead and dismantled a mammoth Pakistan score at Mirpur in the Asia Cup, and now this latest innings only proves that he is going from strength to strength. When the Indian top order does well, the latter batsmen become that much more dangerous. This was evident once again as Raina and Dhoni threw their bat around and gathered some important runs towards the end of the innings.

Despite his valiant ton, there was criticism of Sangakkara’s knock not being quick enough to keep Sri Lanka in the hunt. Blaming Sangakkara would be an unfair assessment, however, since while he could have scored at a quicker pace, it was also a fact that India bowled exceedingly well during the start of the innings. Once Tillakaratne Dilshan fell early, it was always going to be an uphill task. And the tight, wicket-taking spells by Irfan Pathan and R. Ashwin made things even more tougher for Lanka.

In the end, despite the best efforts of Sangakkara and Perera, India emerged deserved winners.