Skipper MS Dhoni’s great century went in vain as Pakistan cruised to a 6-wicket win in the opening ODI at Chennai. Played under gloomy conditions, the First ODI started an hour late at 10:00 AM and went on and on until 6:00 PM under the floodlights!

Skipper MS Dhoni’s great century went in vain as Pakistan cruised to a 6-wicket win in the opening ODI at Chennai. Played under gloomy conditions, the First ODI started an hour late at 10:00 AM and went on and on until 6:00 PM under the floodlights!

India put into bat first on a damp pitch as expected were in big time trouble as the two new balls moved around quite a bit off the pitch and also in the air. The top order had no answer to the Pakistani left-arm quicks Junaid Khan and Mohammad Irfan. Sehwag, Gambhir, Kohli and Yuvraj were all comprehensively bowled through the gate to leave India at 20 for 4 in 6 overs. Rohit Sharma got an unplayable delivery which kicked up off a good length and all he could do was push it off an edge to the diving Hafeez in the slips. 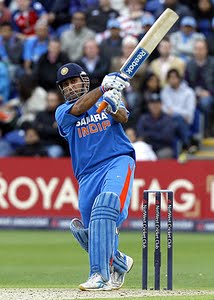 At 29 for 5, Skipper MS Dhoni walked into join Suresh Raina with the Pakistanis expected to wrap up the innings in quick time. However, there was a much needed resistance from the Indian duo who took the score into three figures. Pakistan broke this 5th wicket stand in the 34th over when Suresh Raina (43 from 88 balls with 2 fours) in a pull shot off Hafeez dragged it onto the stumps. Raina added 73 with Dhoni for the 5th wicket.

With the pitch easing out slightly, MS Dhoni got another partnership going this time, a superb unbeaten stand of 125 with R Ashwin (31* from 39 balls) to take India to a competitive total of 227 for 6. Dhoni who was dropped by his counterpart Misbah went onto score his 8th ODI hundred. The Indian Skipper played one of the best knocks ever, finishing with 113* from 125 balls (with 7 fours and 3 sixes) batting as low as no.7.

Junaid Khan was awesome for Pakistan taking 4 for 43 in 9 overs. Hafeez bowled his 10 overs for just 26 overs and the other bowlers along with him kept the pressure in the middle overs. Pakistan lost the plot in the final overs with a couple of players struggling with cramps in the humid conditions including fast bowler Mohammad Irfan.

In the run chase, Pakistan were off to a terrible start with the in-form Mohammad Hafeez out to the first ball of the innings when he offered no shot to a Bhuvneshwar Kumar inswinger. Bhuvneshwar bowled 7 overs on the trot giving nothing away and went onto remove Azhar Ali, luring him into a false pull. Pakistan was on the backfoot at 21 for 2 in the 11th over but the pair of Nasir Jamshed and Younis Khan defied the Indians to put up a crucial stand of 112 runs. Younis chipped in with 58 (from 60 balls with 3 fours and six) before he was caught low by Ashwin at short mid wicket off a full toss from Dinda in the 31st over.

Skipper Misbah-ul-Haq (16) took the score from 133 for 3 to 172 for 4 before he was clean bowled by a slower one from Ishant. India almost got their next ball when R Ashwin had Shoaib Malik caught behind however it turned out to be a noball. Malik went onto score 34* (from 35 balls) while finishing the match with opener Nasir Jamshed who remained unbeaten with his 102 (from 132 balls with 5 fours and a six). Jamshed who was lucky not to be given caught at slip off a bat pad inside edge went onto score his second consecutive hundred against the Indians. The Pakistani opener lost out to MS Dhoni in getting the Man of the Match award.

Pakistan completed the match with 11 balls to spare. The Indian bowling was economical but none of the bowlers had the ability to run through the Pakistani batting. Bhuvaneshwar making his ODI debut was terrific especially with his first spell of 7-3-11-2!

Toss and Teams: Pakistan have won the toss and elected to field in the opening ODI at Chennai. The reasons are obvious with the pitch having quite some moisture and the weather expected to be unpredictable.

Pakistan will have Mohammad Irfan and Shoaib Malik who have been added to the ODI squad following their good show in the T20Is. India has made one change to its line up in the second T20I with Virender Sehwag coming in for Ajinkya Rahane.

Match delay: The first ODI at the MA Chidambaram Stadium in Chennai has been delayed by an hour because of damp outfield conditions due to yesterday’s heavy downpour. Play will start at 10:00 AM providing the weather stays good. Right now, the weather for now doesn’t look promising with overcast conditions prevailing though it hasn’t started to rain yet.

The match for now will be a full 50-over contest as there is always 1 hour window to make up for the time lost. This will be the first match which will see two bouncers in an over along with other changes in the new ICC Rules.